Home » News & Trends » This startup hopes to take on Canva, raising a $11.6M Series A for its design platform 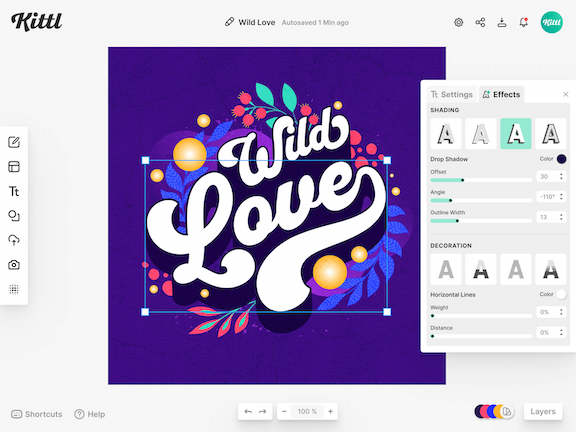 This startup hopes to take on Canva, raising a $11.6M Series A for its design platform

Despite Canva being worth in the region of $26 billion, it appears startups feel there is still plenty to be mined from this ;easy-to-use design platform’ arena. Admittedly, Professional Adobe tools remain fiddly for most people. Perhaps that’s why Berlin-based startup

Kittl has now raised an €10.8 million ($11.6 million) Series A for its design platform which it claims allow people to “easily turn ideas into graphic products”.

The latest funding round was led by Left Lane Capital. Also participating was Europe’s Speedinvest and a number of angel investors including Intercom Co-Founder Des Traynor, former Bebo CEO Shaan Puri, and product leaders from Calm, Amazon and Instagram.

Left Lane Capital is a New York-based VC best known for investing in GoStudent, Wayflyer and Masterworks, among others.

Over email, Heymann, co-founder and CEO told me: “With Kittl we allow users to create professional-grade designs fast and easily by removing the barrier of a tough learning curve. Our features are designed to make complex design processes simple and accessible with a few clicks. Our competitors either focus on basic tools that only allow a small range of creative freedom, or they take a lot of training and practice to get good at.”

Kittl started out as Heritage Type, founded by Heymann and Tobias Saul in 2020, but went on to rebrand after raising a €1.6 million Seed round in October 2021.

Notably, given that AI is probably going to replace a lot of these tools fairly soon, Heymann says they plan to “double down on existing A.I. and machine learning efforts.”

“Kittl’s easy-to-use platform democratizes the creation of professional-grade graphic design,” said Magnus Karnehm, Principal at Left Lane Capital, in a statement. “Kittl has grown its user base and user engagement incredibly fast, and this is entirely thanks to their laser focus on creating a platform that spans ideation, creation, and ultimately monetization of graphic design.”

This startup hopes to take on Canva, raising a $11.6M Series A for its design platform by Mike Butcher originally published on TechCrunch