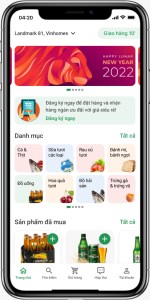 Meal deliveries in Vietnamese cities typically take less than half an hour, but grocery deliveries are lagging behind, sometimes taking up to two to three hours, says Rino founder Trung Thanh Nguyen. By creating a vertically-integrated logistics infrastructure centered around “dark stores,” or stores set up for order fulfillment only, Nguyen says Rino can cut grocery delivery times down to just 10 minutes. The startup, which will launch this month in Ho Chi Minh City, announced today it has raised a $3 million pre-seed round from Global Founders Capital (GFC), Sequoia Capital India, Venturra Discovery and Saison Capital.

After a wider public launch in March 2022, Rino (which stands for “right now”) plans to expand quickly, first in Ho Chi Minh City’s most densely-populated areas, then in Hanoi.

Before starting Rino, Nguyen was part of the founding team and chief operating officer of Baemin Vietnam, one of the country’s largest food delivery apps. Before that, he served as Grab Vietnam’s head of GrabBike and GrabExpress.

When asked why he wanted to focus on grocery deliveries after Baemin, Nguyen told TechCrunch that the rapid adoption of food deliveries in Vietnam “created a clear roadmap for the groceries segment.”

“Four years ago, food delivery in Vietnam was slow. Meals took up to an hour to reach customers, which meant that individuals had to get used to planning meals in advance,” he said. “Once the platforms reduced it to under 30 minutes, consumer behavior changed quickly and the sector as a whole had an opportunity to grow more than 10-fold within a very short time.”

Nguyen believes grocery deliveries will follow the same pace. Adoption of grocery deliveries increased during COVID-19 lockdowns in Vietnam last year, and have become a regular part of consumer purchasing habits, he said. “Customers are ready, but existing delivery options including retail chains or third-party platforms who deliver on behalf of retailers are either too slow or unreliable.”

Rino plans to cut that time down by owning its inventory, purchased directly from suppliers, and integrating its own dark stores into its logistics infrastructure. In order to make deliveries in such a short time, Nguyen said Rino will divide each of its cities into service zones with a radius of one to three kilometers. Each zone will have  a dedicated dark store owned and operated by Rino, with last-mile deliveries performed in batches by its own fleet of riders.

In a prepared statement about the investment, Saison Capital partner Chris Sirise said, “The quick commerce landscape has benefitted from permanent gains as consumers of all demographics continue to rely on e-commerce options even after COVID-19 lockdowns taper off. What we’ve seen from the founding team leading up to the launch reaffirms what we’ve seen from Trung throughout his time spearheading growth at Baemin Vietnam and Grab—high caliber industry leaders who not only have the insights required to lead the market but also the local know-how needed to truly cater to local needs.”