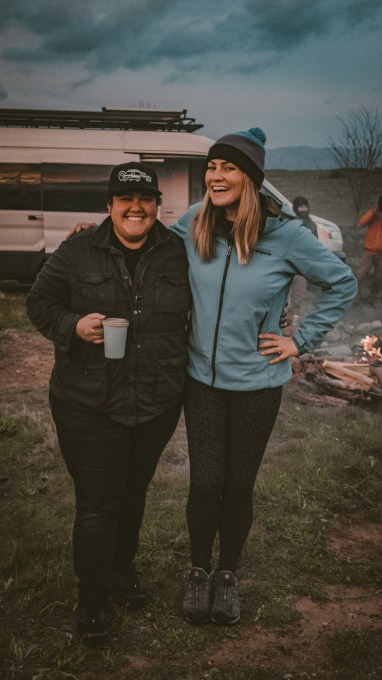 Consumers spent more than $8.5 billion in 2020 on camping reservations across the U.S., but the camping industry itself has yet to be fully digitized. Today, reserving a space at some campgrounds, both public and private, may require a phone call. And the reservation itself is still often recorded using old-school systems, like pen and paper. A startup called Sēkr, which offers a mobile app for outdoor enthusiasts and campers, wants to change that.

The early-stage startup didn’t immediately set out to become an Airbnb for campsites, however.

Back in 2017, Sēkr’s co-founders, Breanne Acio (CEO) and Jess Shisler (COO), were just looking for a better way to scout out new camping locations. The two had been traveling independently with their partners in their camper vans, having embraced the so-called “van life” lifestyle. But they soon realized it was hard to find safe places to camp, as well as people to connect with while on the road. Plus, they both wanted a simpler way to locate campgrounds with the specific services they needed — whether that was shower facilities, restrooms, overnight parking for vans, access to water or free Wi-Fi.

“Trip planning is the number one problem for anyone going outdoors,” explains Acio. And it’s particularly difficult for campers, she notes. “Just like in the ’90s, if you wanted to book a hotel or travel somewhere, you’d have to call hotels individually. There’s no online website or availability.” Camping today is similar.

“We were using 15 different apps — most of which were inaccurate because they’re databases that are based on or are taken from old government websites or old databases,” she says.

Some of these challenges here weren’t just annoyances; they complicated the reality of living and working while on the road. At the time, Shisler had a job in PR, and Acio, who later went on to run a campervan conversion company, was a professor at San Diego State University. They couldn’t go fully off the grid without even a cell signal to stay connected.

After meeting through social media, where they had become micro-influencers in the van life space, the co-founders decided to build a mobile app for people in the same position. The founders wanted to offer a way for campers and others in the van life community to come together and share their individual knowledge and experiences about various campsites and other locations. In March 2018, they launched the first version of this app, then called The Vanlife App. In addition to providing a centralized community for fellow campers and “van lifers,” the app also offered a social component. Users could connect with fellow travelers who wanted to participate in outdoor activities together, like rock climbing or skiing, as well as write reviews about specific places.

“Even if you have your partner, [traveling] gets very lonely,” notes Acio. “Being able to find community — community [where people] are like-minded and like the same things and are similar to you — is a really powerful thing,” she says.

But the original version of the app was too niche. Although there are around 5 million people in the U.S. who are traveling in their self-converted or manufactured camper vans, or other smaller vehicles, the founders realized this narrow focus was leaving out people engaged in other styles of travel and camping. The rebrand to Sēkr allowed them to address the broader market of anyone who wants to go camping — even if that’s just a once-per-year trip with the family.

In the Sēkr app, you can search for campsites all across the U.S., filter them by amenities and services, save favorites and network with others through social features. Its listings are created by way of public repositories of data from the government and other databases, which are then enhanced with crowdsourced information. Sēkr’s team of ambassadors will scout locations, verify information and take photographs to share with the community, as do the app’s members.

Now, the company is working to add more reservable inventory directly to Sēkr by digitizing and aggregating campgrounds and campsites, ranging from private lands to campgrounds. This work is still in the early stages, though.

At the moment, there are around 200 properties that can be booked from within Sēkr’s app, ranging from those where you can park in someone’s driveway for free to upscale glamping sites. To generate revenue, Sēkr takes a 5% fee from guests and a 5% fee from property owners for facilitating the transactions. The company is also planning to partner with others to bring more reservable inventory to the app over time.

Currently, Sēkr sees an average of more than 10,000 user sessions per week — an early bit of traction that’s attracted investors.

The San Diego-based startup has closed on $2.25 million in seed funding led by Storyteller Overland, along with Backstage Capital, Techstars, Ad Astra Ventures, Crescent Ridge Ventures and Andy Ballester, co-founder of GoFundMe. The funds will be put to use to grow Sēkr’s reservable inventory and its community initiatives, which also include its coalition called Project Respect Outdoors, which aims to unite women and minorities to take scalable action to evolve the outdoor industry into a more inclusive space.

“The camping industry is one of the only hospitality verticals yet to successfully adopt technology, and Sēkr seized the opportunity to digitize campsite inventory at scale, transforming the outdoor planning process from a frustrating loop of hours of failed Google searches into something consumers can do by themselves,” said Jeffrey Hunter, CEO at Storyteller Overland and the lead investor of the round, in a statement. “Like the leaders before them in the hotel and vacation rental verticals, we believe the Sēkr team is uniquely positioned to have the largest influence and impact on the outdoor travel planning experience for the nearly three-fourths of Americans who participate in outdoor travel annually,” he added.