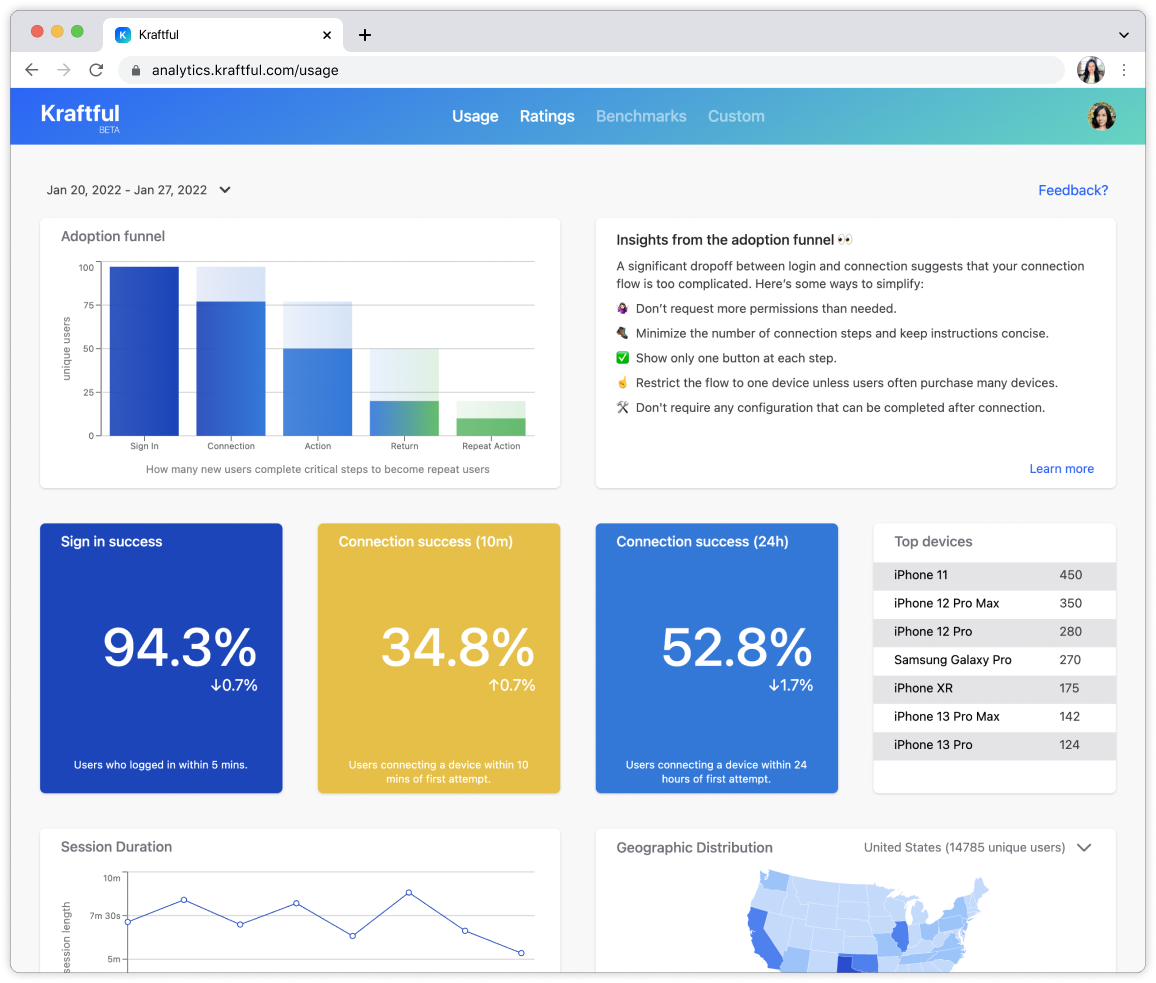 You can’t swing an outdated Python manual in this town without hitting half a dozen app analytics suites, but the same cannot be said if you’re a product manager hoping to figure out where you lose customers for smart home hardware. Ex-IFTTT head of product Yana Welinder today launches Kraftful Analytics, giving folks building connected hardware a deeper look into what the user journey is for users of IoT and smart hardware, in a bid to combat the surprising number of users who buy “smart devices” and then use them as if they were a lot dumber than they ought to be given credit for.

“There isn’t much product analytics in most apps for connected hardware. Before I started Kraftful I headed up the product management team at IFTTT and worked with a lot of connected hardware companies. What I learned from that experience is that there isn’t much analytics in these connected experiences. For the most part, folks have no idea where users are struggling in the product,” says Welinder, CEO and founder at Kraftful. “Connected hardware companies are selling products — sometimes millions of devices — and only a few thousand people end up actually using it as a connected product. There’s a big need for analytics in there. With Kraftful, you don’t have to spend time to figure out how to get general product analytics tools connected, or to develop your own metrics and track them over time.”

The unfortunate truth of the IoT revolution is that it isn’t particularly user-friendly; I consider myself a power user, and most of the time I use the manufacturers’ apps only to connect my devices to Google Home, Apple’s Siri or Amazon’s Alexa, and then use one of the centralized apps or voice commands to use my smart home devices. If the Wi-Fi changes or the devices get disconnected somehow, the smart devices become dumb devices until I re-connect them… and for a lot of users, that timeline is “when hell freezes over.” It simply isn’t worth the hassle to reconnect a smart cat litter box, a fridge or an air purifier when the basic functions of these devices — scooping litter, keeping beers cold or keeping air, er, pure — work perfectly fine without an internet connection.

The other downside, for the product teams, is that unless these devices connect to the internet, they can’t phone home, and the company never knows what’s going on. It could be that 90% of products have an undiagnosed fault. Or perhaps 90% of users are happy with a dumb litter box. Or maybe 90% of users just couldn’t figure out the steps of connecting it in the first place. Kraftful is rushing to the rescue to try to answer some of those questions.

“Hardware companies don’t have time to learn data science jargon to navigate all Mixpanel features, figure out which of all metrics matter for IoT products, and then configure charts, funnels and rube goldberg machines,” jokes Krafful in its press release, but it touches on a rather crucial flaw of the whole smart home ecosystem.

The company is currently in beta with a handful of IoT companies, including a delightfully ironic trio: Fireplace company Napoleon, which makes the air worse, air purification company Aura Air, which makes the air better, and Awair indoor air quality monitoring, which plays the role of the independent adjudicator of the Battle of the Air Purifiers and De-purifiers.

At its core, Kraftful Analytics makes it easier, then to track IoT-specific metrics, like how users connect a device, their user journey, and to determine the appropriate session duration and stickiness for a product using industry benchmarks. The company points out that for IoT, metrics are different; if you spend two hours per day on TikTok, that may be a win for the social media company, but if you spend two hours per day trying to figure out how to turn your lights on and off… not so much.

The company initially targets companies that are trying to move fast; not a bad idea — you wouldn’t roll your own analytics package for a web or mobile app, and it would be mismanagement of resources to build an IoT analytics solution if that isn’t your core business. I’d be hard-pressed to think of a hardware development team that isn’t strapped for hours and manpower, and Kraftful’s solution makes a lot of sense.

The company charges its customers as a SaaS solution, scaling by the number of events.

“We have an SDK for iOS and Android, along with a React native solution. We also recently got our first Xamarin customer, so we are expanding into more exotic types of integration mechanisms as well,” says Welinder. “We have a SaaS solution and we charge on a per-event basis, so it really comes down to how many screens and how many users you have.”

The company recently raised a $2 million seed round from Samsung NEXT, Precursor Ventures, Leadout Capital and various angels. Over the past year, the fully remote team grew from two to six. The company is launching its analytics product today, and is hoping to find a flurry of new customers in the hardware space to start collecting feedback.

Hacking my way into analytics: A creative’s journey to design with data