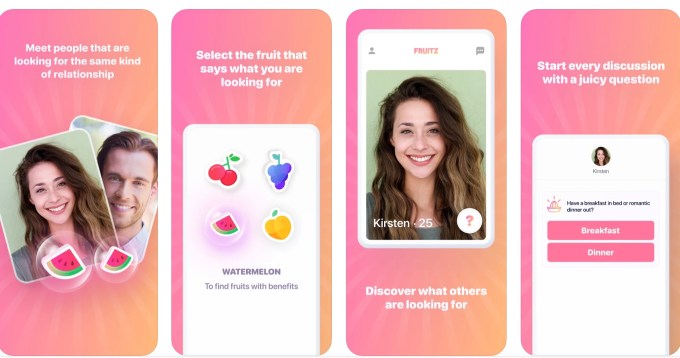 Dating app company Bumble, Inc. is making its first acquisition with today’s news that it’s adding the fast-growing French dating app Fruitz to its family of applications. Though Bumble, Inc. already has an international footprint as the parent company to Badoo, which is particularly popular in Europe, it sees the addition of Fruitz as a way to gain more traction with a younger, Gen Z audience.

The quirky app Fruitz takes an unconventional approach to help users find matches, as it assigns a fruit to each particular kind of relationship type, ranging from those who want long-term commitments to those in search of one-night action. This allows users to filter out those who aren’t on the same page as them. It also prompts users to answer questions that serve ice breakers before messaging their match.

Fruitz was co-founded by Julian Kabab (CEO), Fabrice Bascoulergue (CTO), and Arnaud Ruols (CFO) and initially launched in France on Feb. 1, 2017. Kabab said the idea for the app came from his own attempt at using dating apps, where he was matched with someone who had different intentions in terms of what they wanted out of the experience.

To date, Fruitz has been downloaded 5.6 million times globally across the App Store and Google Play, according to Sensor Tower data. As of Feb. 3, 2022, the app was ranked No. 4 on the iPhone’s top free charts in the “Lifestyle” category in its home market of France.

Like many modern-day dating apps, it offers a swipe-based interface and a freemium experience.

For Bumble, however, the draw was not necessarily in the app’s unique features but rather its demographic. The company saw how Fruitz had particular reach with Gen Z, a growing audience in the dating app market. The app also was gaining traction in key Western European countries, including France, Belgium, Netherlands, Switzerland, and Spain, in addition to seeing rapid growth in Canada.

“Fruitz is a brand and leadership team that I’ve been following for years,” said Bumble founder and CEO Whitney Wolfe Herd, in a statement. “Julian, Fabrice, and Arnaud are dynamic and brilliant leaders who have built a unique product that has struck a powerful chord with consumers in France and across Europe. By plugging the app into our technology platform, community support, brand and growth marketing, we can accelerate Fruitz’s growth,” she said. “The acquisition of Fruitz allows us to expand our product offering for consumers in line with our focus on empowering relationships.”

Bumble will incorporate Fruitz into its suite of dating apps while also providing it with resources including machine learning technology, marketing, localization, and safety platforms. There’s no plan to rebrand or wind down Fruitz operations. Instead, the app’s nine-person team, including all co-founders, will continue to run the app from their home country of France. Combined, Bumble, Inc. — which now includes Fruitz, Badoo and Bumble — has over 900 employees with offices in Austin, London, Barcelona, Paris and Moscow.