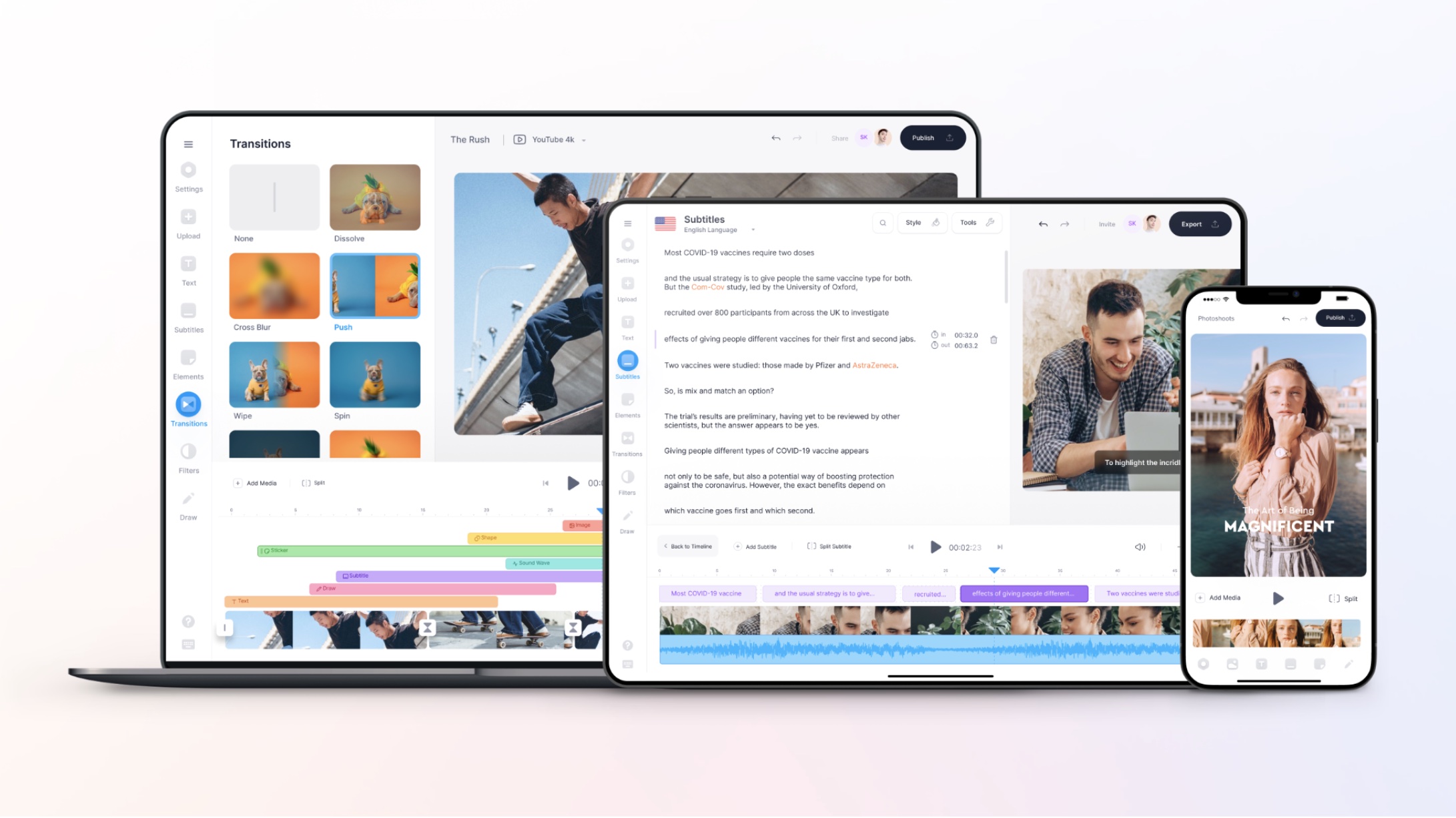 Video is the beating heart of the most popular content online these days, and it’s not just because it’s entertaining. It’s also because of how accessible it is: it’s become incredibly easy for anyone, whether you’re technical or not, to make, post or watch video. Today, a London-based startup called Veed that’s built an online-only, web-based platform for all those video creators to edit and publish their work is announcing $35 million in funding to double down on strong demand.

The funding is coming from a single investor, Sequoia, and this is Veed’s first outside money since starting out as a bootstrapped business in 2018.

Sequoia has picked a promising horse in the startup race. Veed currently has 1 million users and annual recurring revenues of $7 million, a figure that is growing quickly: ARR was $6 million just two months ago. Veed is sold as a freemium product — “tens of thousands” pay for the service, CEO Sabba Keynejad told me — and it is profitable.

Veed started with basic cutting/cropping/merging editing tools, but today it covers a really wide range of other features that speak to the many ways video is used today: they include the ability to add in music or other media and manipulate the sound; create video effects; subtitles; and a range of editing tools optimised for specific platforms like YouTube; along with enterprise video features such as screen and webcam recording and creating teleprompter text.

Veed will use the funding in part to grow that list with features that will see it lean into content distribution: it plans to add live streaming and hosting tools next.

Video has been an online juggernaut for a while now, with its magnetic pull played out through premium streaming services, user-generated content platforms like YouTube, TikTok, and Instagram, through advertising, and more. Cisco estimates that in 2021, video accounted for 82% of all online traffic.

Video editing tools have gone hand-in-hand with that rise. There are dedicated apps for professional and casual desktop and mobile users, online platforms either specifically focused on video or part of bigger suites of creative tools, and tools embedded directly into social media apps, or offshoots of them, as well as tools available via other video services. Some like Picsart and Canva have raised substantial funding; others like ClipChamp are getting snapped up by bigger platforms (in its case, Microsoft) and getting incorporated into much larger, existing products.

So why does the world need another video platform?

It was a question that investors seemed to ask initially, too: Keynejad said the fact that Veed was bootstrapped until now was not because it wanted to build it that way. It was because he and co-founder Timur Mamedov — a computer scientist who tools around as a graffiti artist in his spare time; his work is the background of the picture illustrating this story — couldn’t raise any money. Their attempts to do so included applying and getting rejected from Y Combinator, multiple times. (The essay Keynejad wrote about their YC experience is funny and charming, worth a read.) And they couldn’t get on the same page with seed funds and angels, either.

However, Keynejad said he arrived at the business of building a video editing startup not strictly as a pragmatic entrepreneur looking for an interesting money-making gap in the market, but as someone working in the industry and finding that the available tools were lacking.

Keynejad studied design and interaction at Central St Martin’s in London and after that moved into a career putting that training to work at design studios, where he was required to do a lot with online video. As he recalls it, everything he encountered in the market to do his job was “clunky and complex.” This was not just about how to get to grips with using a particular package, or it having (or lacking as the case may be) a feature you would like to use, but also how the service existed in the modern world. If you collaborated with someone else, for example, many of the packages required users to transfer huge files to each other.

The non-intuitive nature of a lot of existing video tools was particularly acute, perhaps, for Keynejad himself.

He tells me that he grew up with significant dyslexia and was held back for three years trying to pass his English GCSE (one of a set of intense exams students have to take in year 11, aged 15/16, in England to progress to the next stage of school). But if he was conceiving of Veed for the toughest customer — himself — he was also building for a massive market, with an increasing amount of permutations of what online video online looked and what it ws intended to do.

“I just thought that the range and amount of video content we consume had outpaced the tools we had to make it,” he said.

So he got to making the first version of Veed, with the aim of making something that could be used by anyone, regardless of the video creator’s level of experience. Smart choice, given how online video has evolved as a genuinely democratized medium: you’re just as likely to come across highly produced, professional video as you are something from a regular Joe. Key to Veed was building it entirely online: if you collaborated with someone else, all you need to share your work was a URL.

“It’s a super broad set of use cases,” Keynejad said, noting that people have edited weddings, birthday videos, professional coaching sessions, internal communications, influencers doing their thing, and anything else you might brighten up with a ring light.

The funding will also be used to hire more people for Veed to build out the product further. In keeping with the times, Veed won’t be requiring people to work out of London, not least because its own leadership is not: Keynejad left The Smoke for Lisbon this week on a one-way ticket. He told me he plans to stay there for around a month, and then live the life of a digital nomad, working while hopping from city to city for at least five months — ideally hiring people as he moves along, he added.

Sequoia is an interesting VC to come in as a first investor in Veed.

After many years of backing startups in Europe from afar, the Silicon Valley-based venture capital icon set up shop in London in 2020 to take on more European investments in earnest. Partner Luciana Lixandru, who was poached from Accel, was a key hire for that effort, with a reputation for making prescient bets on startups and founders that others were overlooking. Keynejad said that conversations with Sequoia started some time back, after it started to pick up steam as a business, and felt like the natural choice as a first investor for the company.

“Just as we were early believers in YouTube, at Sequoia we believe Veed is the future of video,” Lixandru said over email. “Sabba, Timur and their team are building the next great platform in this ever expanding space. As artists themselves, they have a deep empathy for the creator community and in turn, creators really love their product. It’s incredible what they have achieved so far and we’re honored to be by their side for this next part of the journey.”