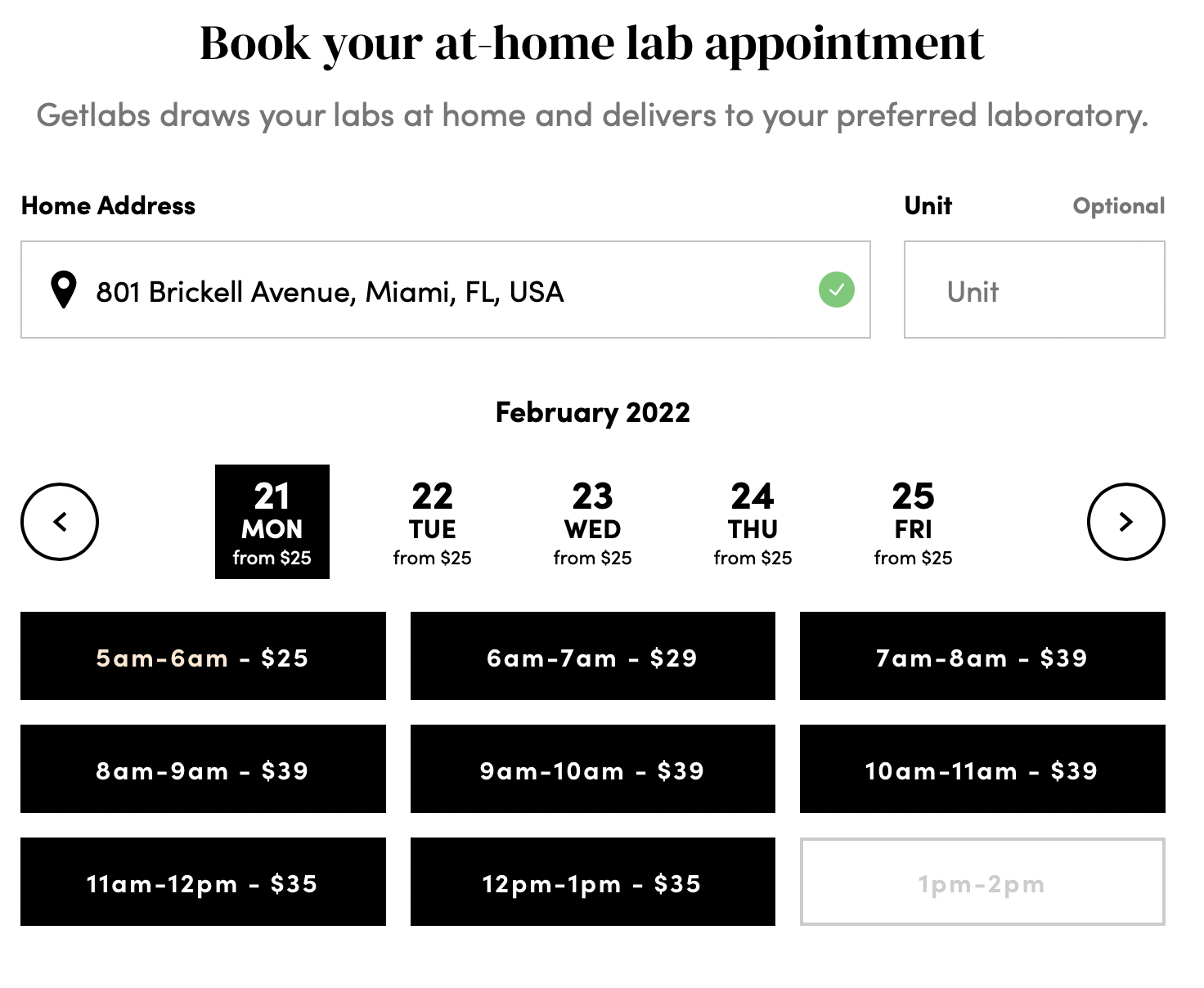 The next time your doorbell rings, it might be a DoorDash delivery, or one of a handful of startups all vying for grocery delivery supremacy. Or it might be a phlebotomist, ready to do your blood work in the comfort of your living room.

That roving phlebotomist is the heart of Getlabs, a startup which just closed a $20 million Series A on Thursday, following a seed round announced less than a year ago in April 2021.

Founded in 2018, Getlabs aims to become the boots-on-the-ground accompaniment to telehealth. For example: Imagine you’ve just had a telehealth visit, and your healthcare provider thinks it might be time for a blood test. Instead of trekking to a clinic, Getlabs will come to your home and get the draw done, for an out of pocket “convenience fee” (to use company parlance) starting at $25.

At the moment, the company collects samples and works with Labcorp, Quest Diagnostics, and Sonora Quest to process those tests.

We covered GetLab’s origin story in detail here. But in short, the company is informed by founder Kyle Michelson’s own experience. While working on streamup (a music video streaming app) at Y Combinator 2016, he found himself struggling to fit in his medical appointments. At the time, he says, he was struggling with a health condition that required regular lab work.

Although telehealth platforms had proliferated, there wasn’t a company that actually offered the in-person services he required.
GetLab’s thesis is that the next iteration of direct-to-consumer healthcare will tackle more clinically complex conditions – the kind that might regular blood work, or lab tests to confirm diagnoses.

“Some of the existing telehealth companies are more focused on these conditions that don’t require hands-on care,” Michelson told TechCrunch. “There’s a new breed of telehealth companies that are built from the ground up looking for a way to reach patients physically.”

“My thinking at the time was, if you had a way to get labs at a patient’s home, you would suddenly unlock the ability for telehealth to go far beyond what it does today,” he said.

Lab work is an important part of clinical decision-making. One commonly cited statistic is that some 70 percent of clinical decisions are based on lab work. Some scientists have pointed out that no one can really find the origin of that number, but it’s been echoed from the Mayo Clinic to CDC website.

In the US, there are about 14 billion lab tests ordered every year, per the CDC. And there’s evidence that more lab tests are being ordered each year. Between 2013 and 2018, spending on US laboratory tests has increased more than 15 percent, per a 2020 paper in Implementation Science – a trend largely driven by healthcare providers ordering more tests. The same trend exists elsewhere, like the UK. In the early 2000s, the average UK citizen got between one and two lab tests done per year, in 2018, the average citizen got five.

Importantly, more lab testing doesn’t always mean better lab testing, but the point is that these tests are becoming more commonplace. But with the increasing use of lab tests, and the expansion of telehealth services happening in tandem, there could be a gap for Getlabs to fill.

Telehealth use has stabilized around 38 times its pre-pandemic level, but in general, telehealth visits tend to result in fewer test orders than in-person visits. This, however, could change as telehealth’s purview expands from urgent care and teletherapy into other areas that rely more heavily on testing.

Some telehealth companies, like Amwell, are beginning to realize that hybrid care models will facilitate telehealth’s bleed into areas like chronic care management, for example. It’s not just Amwell. There has also been investor speculation that the future telehealth isn’t virtual only, but a hybrid model that combines virtual appointments with in-home remote patient monitoring, or visits from trained specialists.

Since their seed round, Getlabs has invested in building out its phlebotomist workforce to act as the in-person part of a hybrid care model. So far, the company has employed over 100 phlebotomists as W-2 employees. The company has a turnover rate of less than .5 percent, Michelson noted.

With that workforce, Michelson says the company has phlebotomists ready to serve about 45 percent of the US population, up from about 6 percent just four months ago. The company aims to reach 60 percent coverage by the end of this year.
One thing to note, though, is that this concentration of phlebotomists tends to be relatively urban-centric. (I typed in a few rural addresses in upstate New York as a test case, and Getlabs hadn’t reached the area. But there were a plethora of appointments available if I wanted a lab done in Brooklyn).

Michelson says the workforce largely caters to a suburban audience, rather than a rural or a truly urban one. “Where we think we actually have the most value is in situations where it’s a patient who lives in the suburbs. You know, they’ve got kids that they have to raise, they’ve got other other situations that make it less convenient for them to go [to a clinic],” he said.

Depending on the telehealth company, that focus might dictate whether the two company’s goals truly align. Telehealth is an especially powerful intervention for rural areas that lack access to specialists or clinics in the first place. So getting boots on the ground in those areas too, will prove especially important to help serve those communities.

Ultimately, Getlabs falls into the category of companies that are treating healthcare more and more like a consumer product, rather than a piece of bureaucratic drudgery. If they’re in your area, it’s pretty easy to book an appointment using the front-end of their platform. But they’re also interested in the back-end of consumer facing healthcare as well.

Rather than having patients book lab visits themselves, Getlabs is aiming to become fully integrated into a telehealth platform by launching its API. That API, he says, would allow for companies to schedule lab tests directly after patients’ virtual sessions.

“All you have to do is get a verbal response, yes or no. And everything else is done seamlessly,” he said.

The round was led by Emerson Collective and the Minderoo Foundation. It includes participation from Tusk Venture Partners, Labcorp, Healthworx, Byers Capital, Anne Wojcicki (co-founder and CEO of 23andMe), Susan Wojcicki (CEO of YouTube), Eric Kinariwala (founder and CEO of Capsule), and Mattieu Gamache-Asselin (founder of Alto Pharmacy).

The major goal of this round, says Michelson, is to increase the amount of healthcare workers hired by the platform. This funding will allow the company to bring on more phlebotomists to expand coverage, and pursue more partnerships with emerging telehealth companies looking for an in-person component.