Home » News & Trends » AllSpice thinks hardware developers lack their own ‘GitHub,’ so it is building one 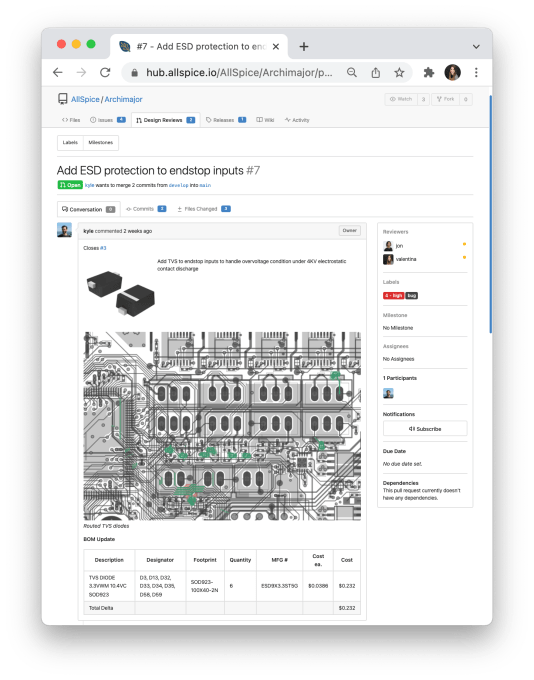 AllSpice thinks hardware developers lack their own ‘GitHub,’ so it is building one

AllSpice, a collaborative hub designed for hardware development, came out of private beta on a mission to build a DevOps ecosystem inspired by GitHub.

Founders Valentina Ratner (formerly Toll Villagra) and Kyle Dumont met at Harvard while both were getting a joint engineering master’s and MBA in 2019. They bonded over frustrations at their respective jobs in what seemed like a hardware industry left behind to rely on PDFs and email to get things done versus software development.

“It felt like the software industry was off and running with good developer tools with strong collaboration and strong automation,” Dumont told TechCrunch. “When I met Valentina, we started brainstorming how we could fix the space and what kind of impact we could have on the size of the market.”

There are many tasks still being performed manually, with engineers spending a good chunk of time on paperwork and spreadsheets, so the idea behind the company was to get engineers back to spending the majority of their time designing and building hardware products, Ratner said.

From surviving to thriving as a hardware startup

Remote work and the recent chip shortage are driving AllSpice and other companies to think a “GitHub for hardware” is in order. Wikifactory, which is building a collaboration tool enabling someone to build almost anything remotely, announced $3 million in funding at the end of 2020. Flux, which raised $12 million last October, is developing a browser-based hardware design tool.

AllSpice’s tool allows engineering-driven people to manage their projects and collaborate with stakeholders within their teams, Dumont said. AllSpice is compatible with tools like GitHub, GitLab and Bitbucket and serves as a home base of sorts for hardware teams to control revisions, reviews and releases from one place.

The company raised a pre-seed round in 2020 and recently closed on a $3.2 million seed round co-led by Bowery Capital and Root Ventures, with participation from Flybridge and angel investors. In total, the company has brought in $3.8 million.

Last year, the company saw “incredible adoption” from people: hundreds of user comments for companies, over 30 projects and hundreds of project repositories made, Ratner said. To keep that momentum going, the new capital will be deployed into new engineering and marketing hires for continuous integration and continuous delivery.

“We take a very developer-driven approach which is something that’s been very established in the software industry for a while, but in hardware, it’s still pretty sales heavy,” Ratner said. “Some of the sales practices haven’t caught up in the industry yet so we make sure that our product is helpful for the engineer first.”

Ratner and Dumont say AllSpice is tool agnostic and so their plan is to bring on additional CAD tools for integrations so it can appeal to a wide range of companies and help hardware teams react quickly to changes in the environment as more things are digital and asynchronous.

Meanwhile, Loren Straub, general partner at Bowery Capital, said the firm was looking at product-lead growth approaches when she was introduced to AllSpice. What she saw most often had to do with supply chain, manufacturing and automation, which also included hardware.

What attracted Straub to the company was the founders’ combined software and hardware engineering experience and how they had both seen and experienced how challenging and antiquated hardware development was.

“When we went through our diligence process, the frustration levels were like nothing I’ve ever seen. People even said they tried to force their workflows into some of the software tools because they heard about how creative the experience was, but it didn’t work,” she added. “Valentina and Kyle had a deep understanding of how much better it could be if the right tools were built for hardware,”

“Before becoming a VC, I spent over a decade in hardware engineering,” added Chrissy Meyer, partner at Root Ventures, via email. “The thing that big companies like Apple had in common with startups was that we still did design reviews using screenshots. I’ve seen hardware engineers cobble together software tools like GitHub and JIRA, but those tools are made for code, not CAD. When I first met Valentina and Kyle, I immediately got excited because they were describing the tool I always wish I had.”