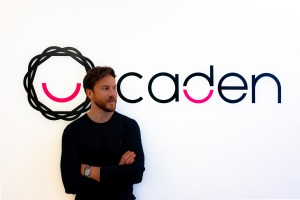 Caden launches with $3.4M to help consumers take control of their data

Entrepreneur John Roa believes in the value of privacy. After selling his design consultancy, ÄKTA, to Salesforce in 2015, he decided to spend a few years “off the grid” on an island in Europe.

Now, he’s back in New York City, launching Caden, a startup that allows consumers to share their data with companies and get paid for it in return. Roa wrote the business plan in the form of a thesis on the future of data privacy while he was working at Salesforce, right before he began his sabbatical, he told TechCrunch.

When he first wrote the business plan, it was “purely speculative,” Roa said. He anticipated that regulation would present challenges for companies in storing third-party, or passively collected, data, and envisioned a long-term shift to a “privacy-first” world where users own their personal data and have full control and consent over its use.

Caden, which just came out of stealth mode with a $3.4 million pre-seed round, is Roa’s attempt toward building this world. Jerry Yang, co-founder of TechCrunch’s parent company, Yahoo!, participated in the round alongside Starwood Capital’s Barry Sternlicht, former Citigroup CTO Don Callahan and other angel investors, according to the company.

The company calls itself a “zero-party” data platform, which means users share data with brands only on a voluntary basis. One of its core products is an encrypted “on-device vault” where a user can store their personal data and see insights drawn from it — a feature Roa compared to Spotify’s “Year in Review” but spanning a broader set of preferences and behaviors.

Caden’s second core product is an API called Link, which allows users to connect to accounts like their e-mail or bank and extract their data to store in the vault. Once it’s in the vault, the user can then opt to give permission to specific companies they trust to use the data, and can revoke or alter the permissions at any time because users ultimately own their data stored with Caden, Roa said.

Roa’s team started working on the technology nine months ago, and plans to bring its beta mobile application to market in the next six months. It will allow users to immediately begin receiving compensation for their data, Roa said, likening the app to a savings account.

A majority of U.S. states have either passed or are considering legislation similar to the California Consumer Privacy Act (CCPA), a state law enacted in 2018 that gives consumers the right to opt out of allowing companies to sell their personal information. Although companies have collected third-party data about their users for years, Roa said regulation is turning third-party data collection into “more of a liability than an asset” for companies because of onerous audit and compliance requirements. Zero-party data, he added, is more accurate and robust because it comes directly from the user.

Caden hopes to attract consumer brands first because they have the most to gain through better access to data, investor Jerry Yang told TechCrunch in an email.

“When you think about how much effort and resources are required to collect and store data, infer insights, protect it, buy third-party data, and keep it all current, Caden is creating a platform solution that allows many companies to tap into without doing it themselves. Beyond the first phase, I’m confident that Caden can also go beyond consumer companies,” Yang wrote.

Caden isn’t the first company to make a foray into this space. Datacoup tried it back in 2012 with its platform that allowed users to sell their data directly to companies, and ended up shutting down in 2019 because users were only making paltry sums of money. Consumer data is difficult to value, and companies are incentivized to find ways to pay as little as possible for it.

Roa believes Caden will be able to surmount these challenges by providing a superior user experience.

While brands are not generally eager to give users their data back, Roa said, “now, they legally have to, but they don’t have to make it easy.”

“What Caden and others are doing is devising ways to make that a much more streamlined process that is completely user-driven, so we don’t actually need the third-party companies to elicit that action back,” he added.

“If by using Caden your life just becomes a little more enjoyable, things are catered to you, and you’re being spoken to — it’s those value points that we’re focused on. And this is where a lot of our contemporaries have struggled,” Roa said.