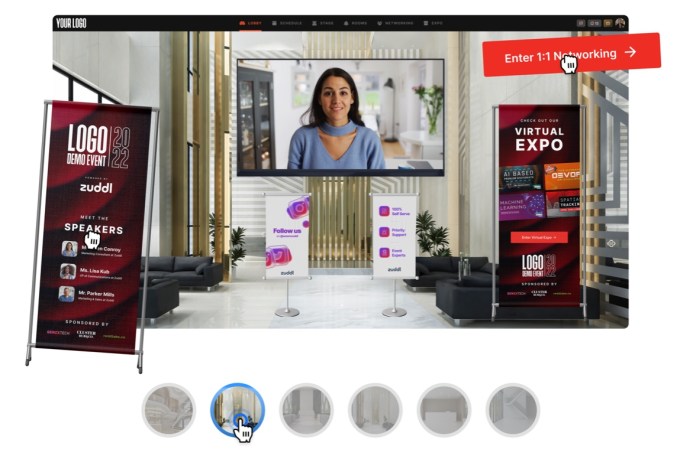 Will the world ever go back to big in-person events? Of course. Eventually. CES already moved in that direction this year, for better or worse.

But everyone’s already gotten a taste of virtual events, and their many ups and downs. Ups? Huge potential audiences! No flights! No mile-long lines to enter the horror show bathrooms! Downs? The tech side of things can get remarkably complicated, and it’s hard to make a virtual show more compelling/interactive/engaging than a YouTube video would be.

Virtual events (or, in many cases, hybrid virtual/physical events) are here to stay. Zuddl, a virtual events platform, has raised a $13.35 million Series A to make them easier to host, simpler to customize, and, hopefully, more engaging.

“These Fortune 1000 companies spend as much on internal events as they do on external events, purely because of the scale of these global teams,” he says.

But every company, and every team, might want to do things a little differently… so Zuddl was built with flexibility/customizability in mind. Want one stage? Sure. Five? Why not! Tweak the color scheme, brand it how you like, and turn on only the features you actually want.

Part of this is allowing companies to build the virtual venue as they see fit, with customizable backgrounds/clickable hot zones to give the interface some semblance of a physical place. They provide a bunch of templates, but companies are free to make it look like a conference center, or a concert hall, or their actual office — just upload your images accordingly. The image-centric approach throws me back to 90’s point-and-click games  (click door, enter room!) a bit, but hey, it works.

Behind the scenes, they’re also doing quite a lot to simplify the complexities of hosting live stages. Each stage’s host invites their guests to go  “backstage”, where they’re able to chat privately, do A/V tests, etc — all right through the browser. They can then quickly shift guests to the audience-facing stage, or pull a guest back off stage if their internet tanks or their mic starts cutting out. There’s a dedicated chat area just for backstage hosts to communicate with onstage speakers (for things like “Hey, you’re on mute.”), so you don’t have to try to cram a Slack window onto your screen between everything else. Zuddl can also handle things like recording sessions, stage timers, and ticketing system integration.

They’ve also put a lot of thought into the experience as an attendee. You can join smaller/private round table sessions while still keeping a live view of the main stage. There’s a rich Q&A/polling system, even allowing audience members to be invited onto the stage (after being vetted backstage first, of course, to check their video/audio and avoid any… erm, surprises) to ask their question. There’s a speed networking feature built in, where attendees can opt in to be rapid-fire matched with others for quick video conversations (with a preset length, so neither person HAS to be the one to end it), and an optional gamification system to encourage attendees to explore the event.

As simple as virtual events (hopefully) might look, there’s often a lot of complex machinery behind the curtain (read: a zillion bits of software taped together) making it all work. I’ve been to (and helped to host!) a lot of these things. At a cursory glance, Zuddl seems to do a good job of boiling many of the pain points away.

This round was led by Alpha Wave and Qualcomm Ventures, and backed by GrowX Ventures, Waveform Ventures, and a number of angels. It was also part of Y Combinator’s S20 class. Varma tells me that Zuddl is currently made up of around 70 people. Prior to this, it had raised a $2 million seed round in October of 2020.