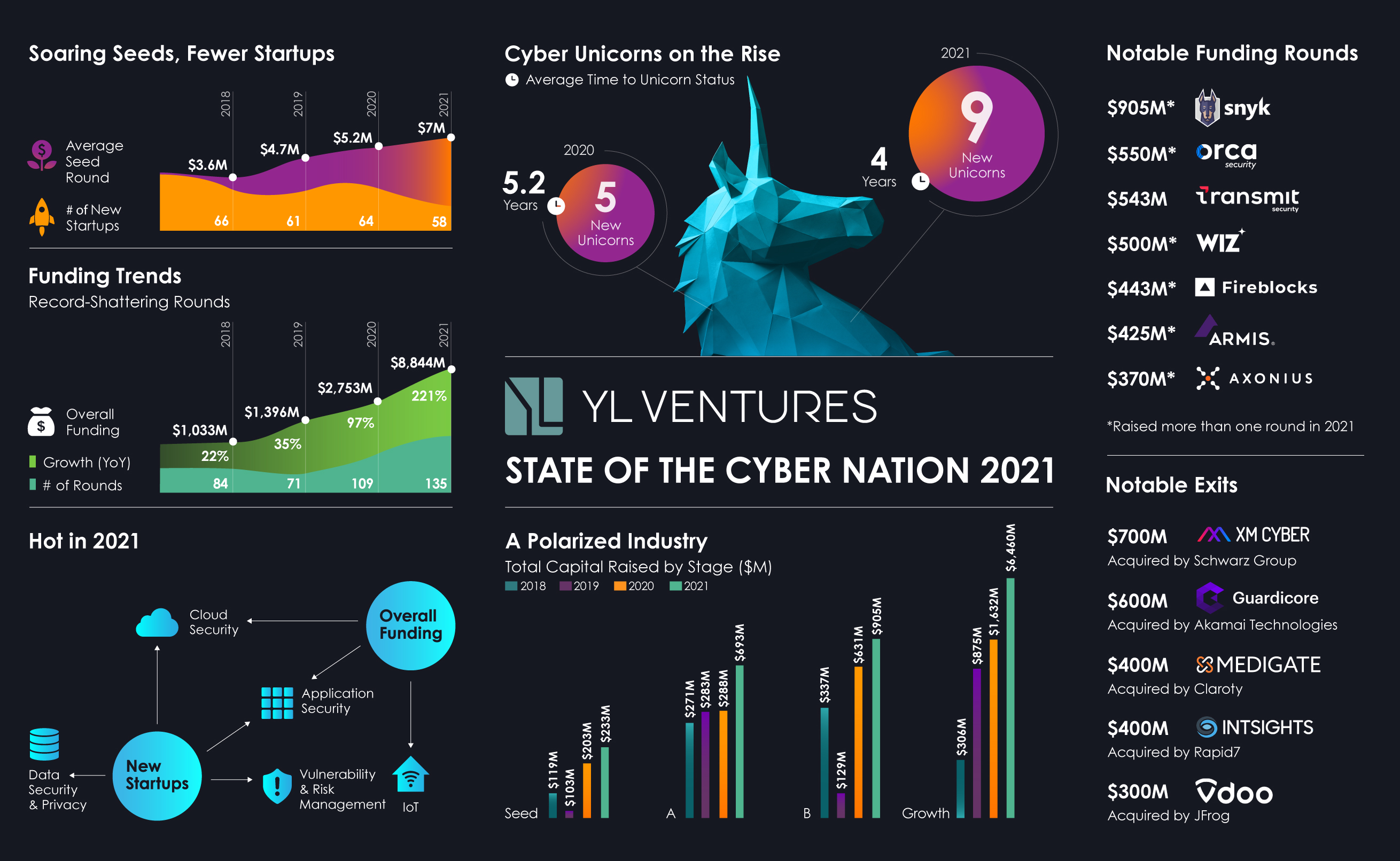 Over the past decade, the Israeli cybersecurity industry has secured its place as a formidable wellspring of technological innovation. No longer famous only for its high level of human technological capital born and bred in elite army intelligence units, the Israeli industry has matured into a veritable ecosystem of its own. With enough capital in this booming ecosystem to grow massive category leaders and cultivate internal M&A, Israeli startups are now major players in the global cybersecurity industry.

In last year’s recap of the Israeli cybersecurity ecosystem, we anticipated that the record-breaking rounds of 2020 and marked-up valuations would continue in 2021, but upon collecting and assessing this past year’s data, we were taken aback by the magnitude. Israeli cybersecurity startups in 2021 raised a stunning $8.84 billion, more than triple the amount in 2020 ($2.75 billion). Investments last year were distributed across 135 rounds, up from 109 in 2020, with 15 startups raising more than one funding round last year.

The cybersecurity market today has limited patience, and a “go big or go home” mindset has permeated as founders focus on laying the groundwork for reaching unicorn status, building multibillion-dollar companies, going public and more. Cybersecurity in Israel has become a polarized market that accepts only two types of startups: potential unicorns and actual unicorns.

With such early and constantly growing investments, the industry has taken on a new approach that favors the survival of the fittest. It quickly becomes clear who will stay the course and catapult to growth and success, and who will look for the nearest exit with no time to linger in limbo.

Off to a running start

In order to achieve this growth, founders are making their goals distinctly clear in investment board rooms. They require more funding for a strong head start and later on for entering the unicorn club at record speed. Fortunately, such sizable amounts of capital are readily available.

“As entrepreneurs, [2021] has drastically changed the industry’s rules,” says Assaf Hefetz, co-founder of Snyk, an Israeli cloud-native application security unicorn. “As threats abound and with skyrocketing demand for innovative solutions, Israeli cybersecurity startups now have an invaluable opportunity to grow big and grow fast. The table stakes are higher [ … ] and in such a competitive arena you have to stand out, or fold.”

The average seed round increased by 35% in 2021, but fewer startups were minted. Image Credits: YL Ventures

The average seed round increased by 35% to $7 million from $5.2 million. As investments rise, so does the bar for entry into the market. Only 58 new startups were founded in 2021 compared with 2020’s 64, a testament to the competitive and highly ambitious landscape.