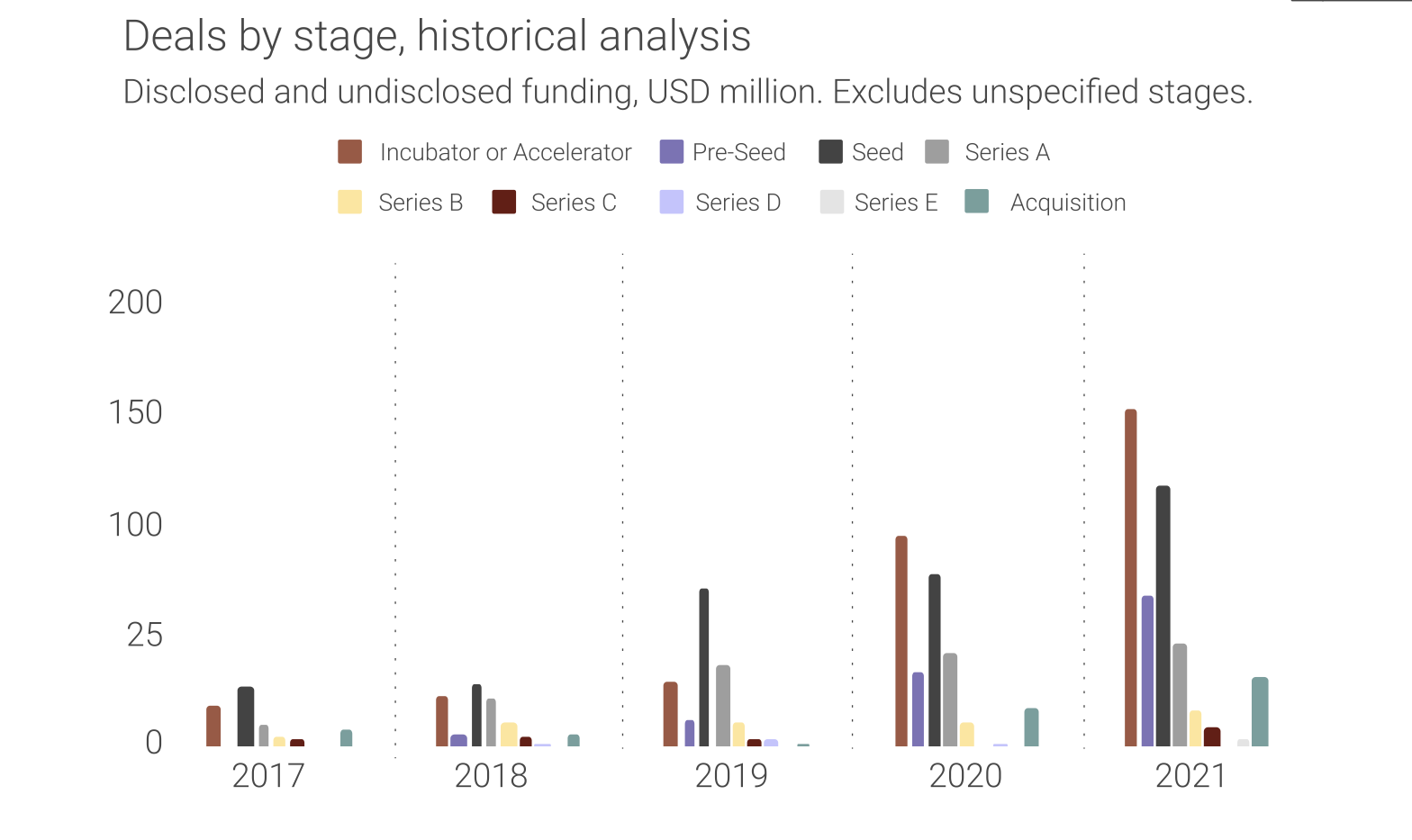 The year 2021 saw more and bigger deals closed in Africa, as tech startups across the continent raised close to $5 billion. This amount was double the previous year’s investment, and nine times what was raised five years ago, an indication of how much the startup scene has transformed over the last few years.

Fintechs dominated the fundraising, accounting for nearly $3 billion, or two thirds of all the investment realized by startups across the continent last year, a report by markets insights firm Briter Bridges shows. This amount was also more than double the $1.35 billion investment that fintechs in Africa raised in 2020, and triple the amount in 2019.

And, given the incremental funding for fintechs in Africa over the years, capital injected into these startups is only likely to increase with deepening mobile phone usage and internet penetration.

Mobile subscriber penetration across the continent is predicted to increase by four percentage points to hit 615 million – half of the continent’s population – by 2025 according to the GSM Association. It is also poised for greater growth as the adoption of lending, digital payments, banking and insurance services grows.

Financial Technology Partners, an investment banking firm focused exclusively on fintech, in a past review of the sector in Africa said that the continent, with its rapidly growing population, some of the fastest-growing economies and an underdeveloped financial services ecosystem, presents an attractive opportunity for fintechs.

“While the payment space begins to see scale-ups such as Flutterwave, Chipper, MFS Africa, Cellulant, Jumo playing alongside global, established providers such as Visa, Mastercard, and Stripe, the next few years are likely to (in fact, we already do) see increased movements across other fintech verticals, from lending to KYC, SME management software, and decentralised finance. This, and greater M&A activity, as the ecosystem moves towards maturity and consolidation,” Director at Briter Bridges, Dario Giuliani told TechCrunch.

Deals by stage in Africa over the years. Image Credits: Briter Bridges

Startups specializing in digital/mobile payments have received the greatest financing over the years followed by banking/lending startups and insurtechs.

The latest data shows digital payments space in Africa has also experienced the greatest growth in terms of funding received and total transactions volume over the last decade when compared to other sub-sectors within the fintech space. The growth experienced by fintechs is against the backdrop of the increasing phone ownership and a deepening penetration of mobile money technology and the internet – all of which have made it possible to bypass the sometimes restrictive traditional banking infrastructure.

Innovations around mobile money and digital payments have allowed for the processing of payments online and offline through USSD or STK commands, over apps or using NFC technology.

Emerging fintech services have banked the unbanked, driving up financial inclusion as their uptake solves some of the greatest pain points experienced by businesses and individuals– like sending and receiving money, and accepting payments. Startups in the remittance space like Wari, sureRemit and Paga, have, for example, made it possible for African residents to receive money from overseas easily and affordably.

Africa is regarded as the world’s second-fastest growing and profitable payments and banking market after Latin America, according to this McKinsey study, and this only means that the fintech sector is likely to continue to attract investors tapping on the increasing growth opportunities.

For instance, M-Pesa, a mobile money service by East Africa’s biggest telco, Safaricom, does not require internet connectivity for its customers to send and receive money, as well as to pay utility bills – the wallet turns subscribers’ phone numbers into a sort of proxy for bank accounts. The service recently surpassed voice to become Safaricom’s top earner after the platform’s revenues hit $745 million for the financial year ending March 2021.

Across the region (especially in Kenya) M-Pesa has served as an anchor for a raft of new services that are coming online. In 2012, for example, Safaricom laid the ground for the adoption of lending apps when it first launched M-Shwari – a mobile-based savings and loans product. Many more lending apps have since emerged in the market including Silicon Valley backed Tala and Branch. These now-popular lending apps use customers’ mobile money transaction history to determine the amount of instant credit to extend to borrowers – monies that are then deposited in customers’ mobile money wallets.

Such lending and banking startups have made credit accessible to a majority of people with no credit scores, and who were previously cut out by formal financial institutions due to a lack of banking history data.

Insurtechs have also over the last few years thrived with the birth of innovative products that are affordable, allowing micropayments, and covering growing risks including those brought by climate change. Innovative products around insurtech have also encouraged the uptake of insurance products – even though the penetration across sub-Saharan Africa (with an exception of South Africa) remains low compared to other regions.

While investments grew in 2021, the bulk of the funding went to a small number of startups. Analysis by Briter, which includes data from both disclosed and undisclosed deals, shows that an estimated $3 billion of the total amount raised went to 20 companies, as over 700 other startups raised nearly $2 billion.