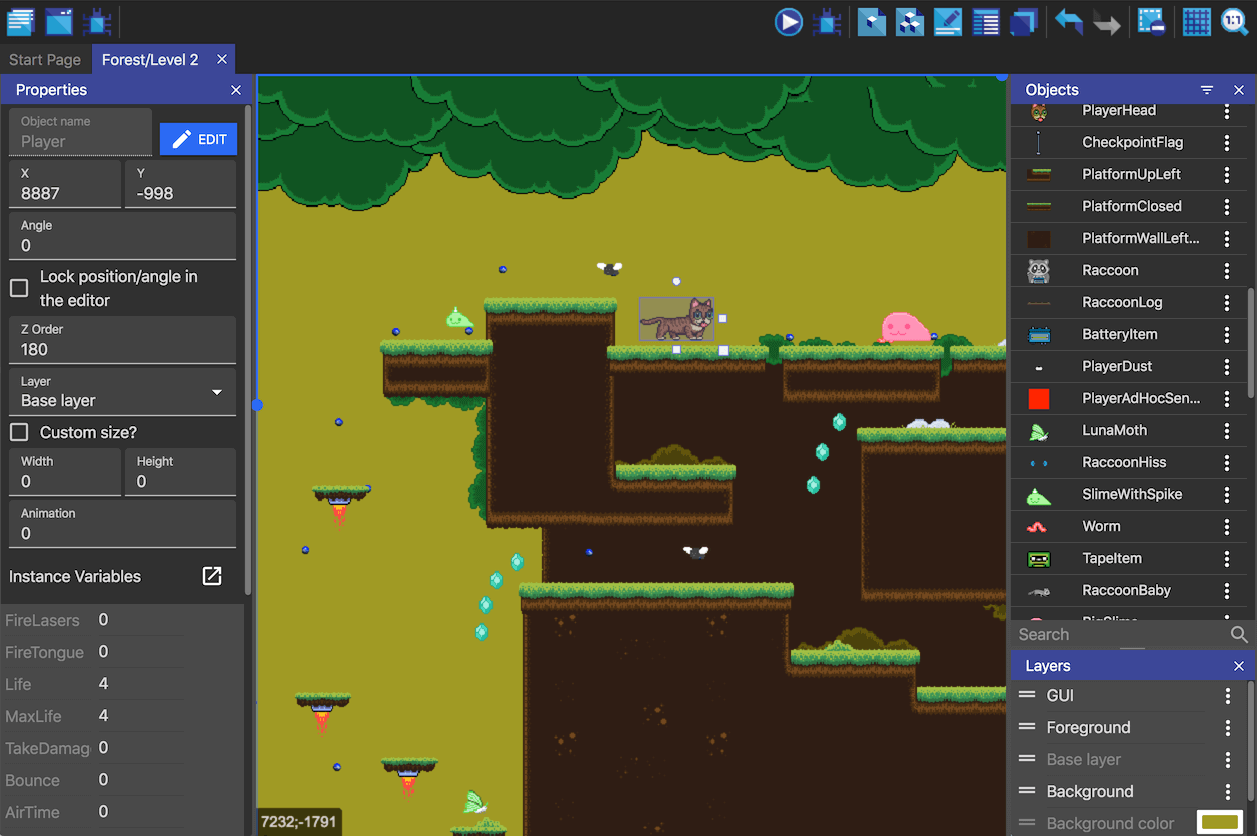 GDevelop is a game engine that lets you develop a video game without any specific development experience. While the ‘no-code’ trend has been quite popular this year, GDevelop has been around for a few years already.

Florian Rival first started working on GDevelop as an open-source side project. The first public version on GitHub was released back in 2014.

With GDevelop, he wanted to make game development as accessible as possible. You can launch GDevelop from a web browser or install it on your computer. You can start from a template, modify it and try it out whenever you want.

GDevelop focuses specifically on 2D games as it’s more accessible for both players and developers. When it comes to level design, you can simply drag and drop objects on the scene.

As for game design, you can see all the game mechanisms from the Events tab. Everything is described with a condition and an action — if the player is jumping then animate the character with the ‘jumping’ animation.

There are a lot of actions that come with GDevelop by default. And if you want to do something a bit specific, there’s an extension system that lets you add some logic to your game. Developers can also create their own extension if they want to go further. An extension is a set of conditions and actions, or JavaScript code.

GDevelop leverages web technologies to render the game, such as WebGL, JavaScript and WebAssembly. When you’re ready to export your game, you can export it for the web or turn it into an Android game. On average, half of GDevelop users export their games to Android.

Over the years, GDevelop has attracted some nice metrics. There are hundreds of games on the showcase page on GDevelop’s website. Some games created in GDevelop have become quite popular. For instance, Vai Juliette reached the number 1 and number 2 spots in the top free download charts on the Play Store and App Store in Brazil. It represents more than a million downloads.

Some developers spend a lot of time working on complex games with GDevelop and release them on Steam or Itch.io. Some brands also use the engine to create promotional games and support a new product launch.

“My dream is that the next Among Us will be developed using GDevelop,” Florian Rival

For all those reasons, Florian Rival is creating a company around GDevelop and is now working full time on the game engine. The startup has recently raised a $1.4 million funding round led by Seedcamp, with Secretfund, Kima Ventures, Ascension, Jabre Capital Partners, The Fund and Foreword.vc also participating. A few business angels also invested, such as Michael Pennington, Ross Sheil, Emmanuel Nataf, Will Neale and Ian Hogarth.

The team of six people is iterating on the open source game engine so that it gets better and better. When it comes to monetization, GDevelop doesn’t want to release a commercial engine. Thanks to the MIT license, game developers still own 100% of their games that they developed using GDevelop.

Instead, the company is thinking about services that could be useful for GDevelop users. For instance, GDevelop could offer a one-click export solution to release a game and monetize it.

Many mobile game developers rely on ads to generate revenue. But integrating ads in your game can be complicated. Developers could choose to integrate ads with GDevelop’s own ad feature — the startup would keep a cut on ad revenue.

Essentially, as long as GDevelop remains popular, there will be different ways to create revenue streams to support future development.