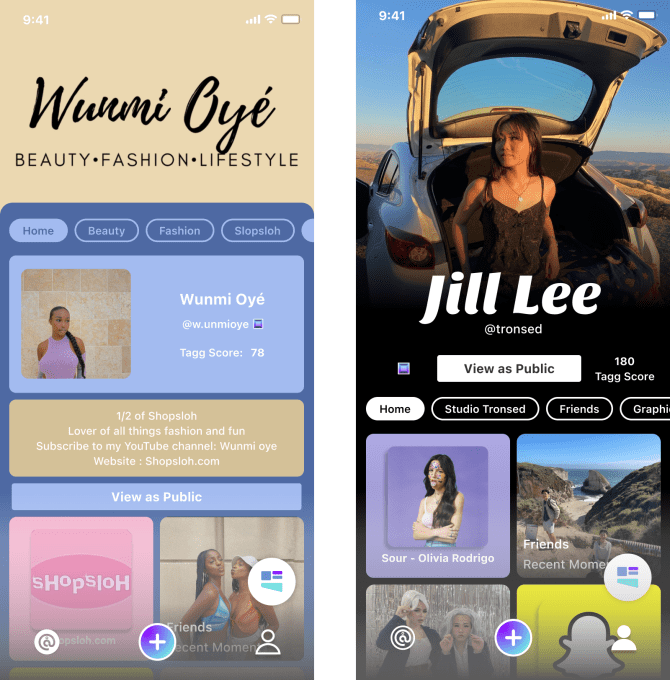 Gen Z isn’t satisfied with the social media they grew up with, so they’re building the apps that they want to use. A “social branding” app for creative teens and twenty-somethings, Tagg is announcing a $2 million seed round today from Twitter co-founder Biz Stone, Facebook’s former VP of International Growth Ed Baker, TripAdvisor founder Stephen Kaufer, Pillar VC and more.

Founded by recent alumni of Brown University and the neighboring Rhode Island School of Design, Tagg is still in private beta with thousands of users, and thousands more on a waitlist. It’s like a link-in-bio service, but with a social element that encourages young creatives to connect, collaborate and develop friendships.

“In the digital world, the more authentic your brand, the more genuine your connections. Current social platforms fall short as they were not built for this evolving intersection of branding and connecting,” the company explains. “Tagg is building and growing an environment allowing for full creative expression of oneself—no restrictions, no stigma.”

Depending on what you want to use your profile for (you might want a social profile, or you might want to promote your art and network), you can choose from five profile skins when you onboard into the app. From there, you can customize your page, then follow people and post content like you would on any other app. But on Tagg, there’s no like count on posts, which is an intentional design choice.

“We do not have likes — just comments, sharing and views — because we want our creatives focused on being their favorite selves with no stigma,” co-founder Victor Loolo told TechCrunch.

Especially among the Gen Z audience that Tagg is built for, users don’t always want like counts, since they know it can encourage them to compare themselves to peers in a superficial way. Even US Senators like Ed Markey (D-MA) and Richard Blumenthal (D-CT) have introduced legislation that would ban like counts for social media users younger than 16, since it might harm teens’ mental health.

Tagg’s “social branding” marketing might seem counter-intuitive at first glance — the concept of branding might sound like you’re putting yourself in a box. But by design, Tagg encourages its users to grow out of their comfort zones. Even though users build their profile through using preset skins, these are only suggestions — if users want to build their profiles from a blank slate and create their own categories to organize their content with, they can do that.

“Profiles can look like anything, that’s the beauty of it. We wanted to move away from the traditional, restrictive, cookie-cutter profiles that all social apps have, because as Gen Z-ers, we value freedom of expression and uniqueness a lot,” Loolo explained. “We wanted to find a happy, user-friendly medium between a traditional profile and a blank page, which would be challenging for a lot of people, so we went with profile skins.”

Tagg was inspired by Loolo’s own experience as a football player at Brown, where he felt that it was difficult to define himself outside of his identity as a student athlete. That’s what inspired him to build Tagg, alongside co-founders Blessing Ubani and Sophie Chen.

“People are kind of put into a box. Let’s say I’m a guy who does cooking videos on TikTok — I’m the cooking video guy. But I might enjoy video games and other stuff,” Loolo told TechCrunch. “We wanted to break away from that and allow for these creatives to curate more holistic pictures of themselves.”

Tagg users currently earn points by engaging with the platform — while these points are currently just a vanity feature, Loolo sees this as a potential future for the app.

“Although Tagg is not currently decentralized or tokenized, the principles of our platform mirror web 3’s values,” Loolo said. “One of our goals is to help our creatives understand that being directly rewarded for their content sharing and community participation is the solution to the issues of creator economy, as opposed to underpaying creator funds and inconsistent brand deals.”

In the future, Tagg could move toward allowing users to earn a coin or token with value. But for now, Tagg is focused on onboarding more users from its waitlist and acquiring more users.

After graduating from college in 2020, the team moved to the Bay Area, where they have continued to work on the app. With its recent funding, the app is hiring to expand its team. Recently, Steven Fang joined Tagg as a CTO and co-founder, bringing fifteen years of engineering experience.