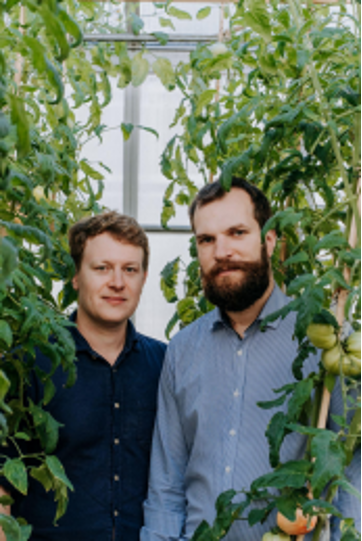 Climate change is affecting the way farmers grow their crops, and Phytoform, which knows all about the harsh United Kingdom growing conditions, is out to make crops more impervious.

The biotechnology company with headquarters in London and Boston announced $5.7 million in funding, led by Eniac Ventures, to scale its artificial intelligence genome editing technology aimed at improving crops.

Phytoform was started by William Pelton and Nicolas Kral in 2017 while the two were finishing up their PhD degrees. CTO Kral was studying plant development biology, while CEO Pelton is a crop scientist. He told TechCrunch that his grandfather was a farmer, and he grew up hearing about crops failing due to the U.K.’s weather and other factors.

“We are lucky to be where we are with genetics,” Peloton said. “You can do the whole plant genome for a few hundred dollars and synthesize the genome as well. Nic and I were PhD students and decided to give it a go, taking technology and applying it to some problems we see.”

The success of CRISPR technology in agriculture has been well documented over the years as a way to manipulate plant genomes to make them more pest and climate resistant and grow more consistent products.

Pelton and Kral say utilizing this technology for plants couldn’t come faster as the Food and Agriculture Organization of the United Nations estimates up to 14% of food globally is lost every year and climate change will only get worse amid drought, heat and pest conditions increase in the next few years.

“At Eniac we are big believers in the future of sustainable agriculture with existing bets that include Vence and Iron Ox,” said Vic Singh, general partner at Eniac Ventures, in a written statement. “As the climate crisis worsens, we’ve looked closely at how computational genomics can be leveraged to reduce food waste and bring higher quality diverse produce to market. We were immediately drawn to Phytoform’s founders Will and Nick’s approach of using deep machine learning on plant genetics combined with genome editing to offer a portfolio of optimized produce to consumers.”

The new funding will enable Phytoform to expand its team and boost its work introducing traits in tomatoes and potatoes so that there is greater yield and fewer crop losses along the food supply chain.

The co-founders say 2022 “is going to be a great year” for the company as it prepares to bring its tomato and potato program to market. They are also working on three other programs and have expanded their geographies from just the U.S. to Australia and the U.K.

In addition, they have focused efforts on partnerships with individuals and companies at the beginning of the supply chain — seed breeders and producers — and future plans to expand that to food producers.

Meanwhile, the company’s initial business model will be royalty revenue from the sale of the seeds, but expects that to change as its customer base evolves all the way to the consumer, Pelton said.

Phytoform started the year with six employees and has now doubled its headcount, Kral said. In addition, it has achieved good technological growth with proof of concept for its AI process both in software and web lab capabilities.

“We still have quite a big process on the way to get the tomato program in the late stages of development, but we will continue to do more trials,” he added. “Current technology is taking a decade to generate new varieties, but we are proving we can cut that down.”