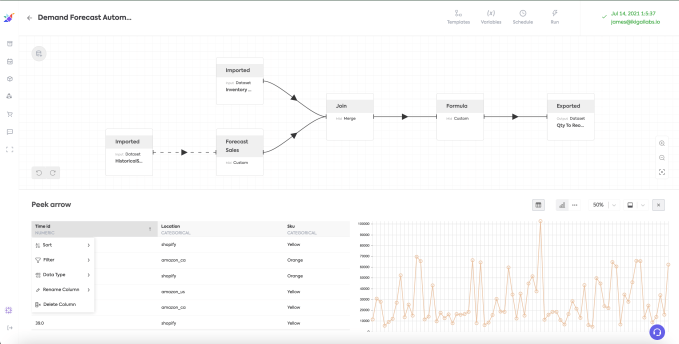 The company announced a $13 million seed round today from Foundation Capital, 8VC, Underscore VC and a variety of industry angels.

Company co-founder and CEO Vinayak Ramesh says that he found in his research at MIT, and at his previous startup, Wellframe, a digital healthcare startup acquired this month, that there were more complex workflows out there that RPA wasn’t reaching.

“What we saw is that there are use cases…[that involve] manual processes in the organizations that were extremely difficult to automate because a fundamental step involved humans making judgments or decisions with data, and where both the data and rules they’re operating on would change very often,” Ramesh explained to me.

Ikigai, which means ‘your purpose’ in Japanese, wants to solve that problem with a tool that lets users create drag and drop workflows involving disparate data sources, while building in steps where humans make decisions, and then viewing the results in a dashboard/spreadsheet view. They describe this as an “AI-charged” spreadsheet.

But they believe that they differ from other supercharged spreadsheet approaches like Power BI and Airtable. “[Those tools] require humans in the workflow, but they’re not decision- or data- based workflows,” he said, and he says that ability to build in decision loops is a key differentiator for their product.

The company currently has 20 employees, mostly engineers, with plans to double that next year. The founders definitely seem to recognize the need to build a diverse and inclusive team as they scale the company.

“Diversity helps make everything a much nicer place to work because you have different perspectives, different types of people coming into work every day,” Ramesh said. He also points out that many of his early employees are immigrants, and the company has worked with these folks to help them navigate the difficult process of getting visas to work in the U.S.

The company idea grew out of research that Ramesh was doing as a student at MIT. In fact, CTO and co-founder Devavrat Shah is a professor of Computer Science at MIT and was Ramesh’s professor. Shah also started another company called Celect, which was acquired by Nike in 2019.

After helping to help found Wellframe, Ramesh went back to grad school where he connected with Shah. As the idea of a product like this only became more pronounced over time, they began to research it further and built the product last year.