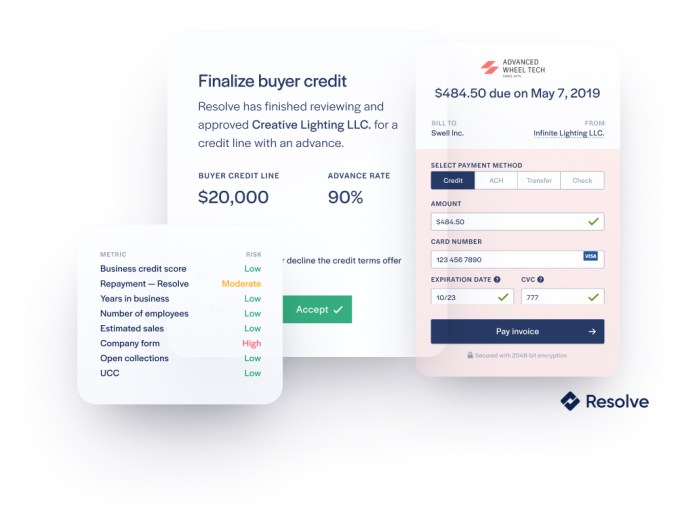 Resolve, which specializes in “buy now, pay later” capabilities for B2B transactions, announced today that it has raised $25 million in equity funding.

Since launching as a spinout from Affirm in 2019, Resolve says it has seen “overwhelming” demand for its B2B buy now, pay later (BNPL) billing offering for business purchases.

Unlike Affirm — which is more focused on the consumer — Resolve is exclusively focused on business-to-business billing by automating the process of billing and purchasing on credit. What it’s doing is basically allowing businesses to defer payments digitally and on better terms than what they’ve seen historically via an automated underwriting process, the company claims. This, it says, can lead to faster invoice payment and thus, improved cash flow.

The company also claims it can offer extended payment terms with buyers not having to pay any interest or fees if accounts are repaid within the agreed-upon terms. Meanwhile, merchants receive full payment (minus any fees) as soon as an order is placed.

The startup in particular is seeing an increasing number of small business service providers as of late embrace BNPL as a less risky way to offer net terms to customers who expect to pay later.

Resolve, ahem, resolves to make net terms simple and easily embeddable. Historically, noted Tsai, a manufacturer, distributor or B2B marketplace that wanted to give their customers 30, 60 or 90 days to pay an invoice would have had to take on the obligations and characteristics of a bank, such as credit checks, onboarding and accounting reconciliation.

“It was laborious and took a lot of time and money. In contrast, we offer ‘net terms-as-a-service’ so that companies can provide the professional net terms their customers expect with all the benefits and none of the hassle or risk,” Tsai told TechCrunch. “We make sure the merchant gets paid upfront without having to actually wait for the end of the payment term while facilitating the complex end to end process.”

Resolve stands out from others in the space, according to Tsai, in that it both simplifies the net terms process and makes credit embeddable anywhere a business might want to accept B2B payments. Its ability to integrate into existing ERP/accounting tools that businesses already use is appealing to many users, he said.

“The company’s innovative product creates a win-win for B2B buyers and sellers that is analogous to buy now, pay later offerings that have changed the game for consumers,” she wrote via email. “We believe B2B BNPL remains a massive, untapped market, and early movers like Resolve are well-positioned to take advantage.”