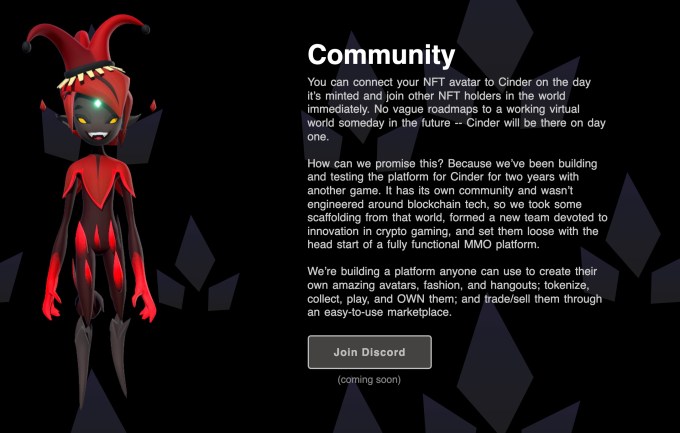 Less than a year ago, WildWorks, the makers of the kid’s virtual world game Animal Jam, launched its next big effort with a game aimed at Gen Z teens, called Feral. But in recent days, the company has angered many of its core users with news that it’s reusing Feral’s technology platform and many of its assets to enter the crypto-gaming space with a metaverse game called Cinder, powered by the Solana blockchain.

The response from WildWorks’ core fans has been far less than enthusiastic to this news for a variety of reasons. Already concerned about Feral’s pace of development and unfinished nature, players are now worried about what it means for Feral’s future now that the company has moved on to build a crypto gaming experience using Feral’s assets. They’re also less than thrilled about the environmental impacts of crypto gaming and NFTs — an opinion which WildWorks CEO Clark Stacey, until recently, had shared.

In a Medium post, Stacey addresses this specific concern among others, noting that he himself had believed that technologies like NFTs were “were irreconcilable with environmental conservation,” and bereft of value to gamers.

However, he says his opinion has since changed as he’s learned more about blockchain developments beyond Ethereum. While Ethereum, like Bitcoin, depends on an energy-intensive “proof of work” system that requires what Stacey called a “ridiculous amount of computer power” to validate its transactions, alternatives have emerged that are iterating on the less energy-demanding “proof of stake” validation systems instead — like Wax, Cardano, and Solana.

“Transactions on these blockchains can be more efficient than the credit card networks we use to take payments in most of our games now,” wrote Stacey. “Coupled with WildWorks’ ongoing efforts to offset and reduce the carbon emissions of game development, we’re determined that our use of the Solana blockchain in our new game will not increase the company’s carbon footprint,” he said.

Cinder players will use the Solana blockchain to purchase their “playable NFTs” — the Cinder Fae which will include 11,111 exclusive avatars designed by the WildWorks team. The NFTs feature roughly 150 characteristics of varying rarity across 9 categories so each will have a unique look that can’t be duplicated, the Cinder website explains. Players will be able to connect their NFT avatar to Cinder on the day it’s minted to join the free-form MMO’s community and explore the virtual world. The minting is planned for early January. Then, over the next year, players will be able to turn game content they design — like avatars, play spaces, and party rooms — into NFTs stored on Solana that can be bought or sold through Cinder’s marketplace.

Though Stacey addressed fans’ concerns around the environmental concerns around crypto technologies, that wasn’t the only reason fans were frustrated with this shift in direction towards crypto.

Many also felt that today’s crypto ecosystems still have a lot to answer to in terms of their other downsides — including their use for money laundering purposes, or how NFTs too easily enable the theft of creators’ art, and the security issues with “altcoins.” Stacey acknowledges there’s some truth to these accusations, but also notes it’s early days for blockchains in general, and that regulation and further development may address these concerns. He also said that there are creators who do want to involve themselves with these new technologies in order to help contribute to solutions that benefit the creator community, and they should have that opportunity.

One such area includes creator-designed avatars and other tradeable content, which can be difficult to profit from on current platforms like Roblox, Stacey said.

“[Roblox doesn’t] create gameplay experiences themselves, they aren’t the ones whose creative output is actually engaging players, but they get 75% of what creators earn because they control the platform and own their users’ output. If I make a really cool avatar in Roblox and someone wants to buy it from me, I can’t sell it to them without the platform’s intervention,” Stacey wrote. (The Roblox “cut” is actually a bit more complicated than that, in part because the mobile app stores take their own cut on top of Roblox’s share. But the general point that developers earn a small portion of the overall revenue is an accurate one.)

Cinder’s NFTs would instead allow users to tokenize then sell and trade their creations, retaining more of the total revenue. Stacey, in the Discord AMA, said Cinder’s marketplace will allow players to retain 96% of the transaction, with Cinder only taking 4%.

But Feral fans aren’t necessarily looking for explanations. They’re simply opposed to crypto and NFTs and are making their views known. This belief system may also have to do with how the fans still view WildWorks as a kid’s game maker — or at the least, a game maker aiming at the under-18 market. Having begun their journey on the kid’s game Animal Jam, they see the company’s move into the crypto-gaming space as an inappropriate one.

However, WildWorks had already signaled its interest in expanding beyond the kids’ gaming market with Feral, which it aimed at teens, not younger children. With Cinder, the market isn’t kids or teens — it’s adults. The company said the new game is meant to attract a similar demographic to those who would play other crypto games like Axie Infinity, The Sandbox, or Blankos Block Party.

More importantly, WildWorks needs revenue to continue its gaming ambitions — Feral or otherwise. Stacey told the Feral Discord community how WildWorks has invested over 2 years of development and $6 million into building Feral. While it aims to make that a self-sustaining business, that time hasn’t arrived yet.

Stacey admitted to TechCrunch that it became clear while Feral was in Early Access it wasn’t achieving the product-market fit WildWorks had hoped for.

“We reached the point where we couldn’t continue investing in it at the level we had been and stay financially healthy,” he told us. “We didn’t shut the game down, however, because there was a passionate community still playing, and we hoped to find either a new publishing home for it or other means to continue development.”

Cinder could provide that “other means,” if successful — but ironically, Feral may not survive to see that happen because of the fan backlash. Fans are threatening to quit the game and cancel their Animal Jam subscriptions in protest.

For some, WildWorks’ shift into crypto gaming was a nail in the coffin, as they took the opportunity to vent about other issues they had with the company. Fans veered into off-topic discussions over perceived failures in WildWorks’ moderation systems, hackers, and its use of headdresses in Animal Jam — which Stacey acknowledged had been an “ignorant” choice. (The company had discussed the issue with the Native American players who reached out, apologized, and agreed that those virtual items would no longer be made or promoted. The company didn’t delete the items from players’ inventory, if already acquired, however.)

The friction between WildWorks’ business needs, coupled with its desire to explore what it sees as the future of gaming, and the real-world reaction from its longtime fans is an example of how difficult it can be for companies to embrace blockchain and crypto technologies. This problem is worsened as the blockchain’s potential can often be obscured by the negative aspects of the industry — or, as Stacey put it the “thieves and grifters and bad art” and the lack of “regulatory guardrails” around crypto developments today.

As for Feral, fans’ concerns over its future seem to be valid. Stacey says if the community continues to support the game, it will find a way to continue building it.

“If they do not, we’ll announce plans to sunset it as soon as that decision is made. It has not been made to date,” he notes. “We understand that many in the Feral community are philosophically opposed to NFTs and blockchain technology in general, but while we’ve attempted to address their questions and concerns, Cinder is being designed for and marketed to a different player. They will lose nothing from the presence of assets we created for Feral also being present in Cinder.”