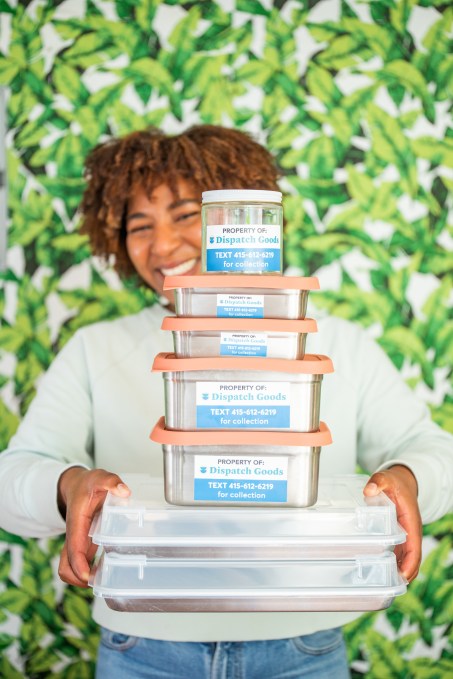 Plastic containers are ending up in landfills and oceans all over the world as more countries stop accepting our recycled goods. This is adding up: The average American uses and throws away 110 pounds of single-use plastic every year, yet only 8% of plastic is recycled in the United States.

You might think that all of those clamshell plastic containers we get from restaurants, food delivery services and grocers are recyclable, but the reality is that not all recycling centers accept them.

Dispatch Goods co-founder and CEO Lindsey Hoell started the company in 2019 to build out an infrastructure that takes on the heavy lifting of recapturing plastic containers, freezer packs and packaging. All of those are taken back to the company’s facilities where they are washed, sanitized and sold back for reuse. Even restaurant or food delivery customers can text a number on the containers to schedule at-home collection from Dispatch Goods or deposit their containers in a return bin.

Prior to starting the company, Hoell had a career in medicine, but dreamed of moving to California and being a surfer. She ended up moving to California, which is where she became aware of the plastic crisis. Hoell met her co-founder, Maia Tekle, through the Sustainable Ocean Alliance while she was launching Dispatch Goods. At the time, Tekle was West Coast partnerships lead at Caviar.

“Recycling makes people think they are doing something good, but when we dug deeper, we found that we aren’t always doing good if there is no secondary market demand,” Hoell told TechCrunch. “Containers can only be downcycled, but there is not a good infrastructure in place to collect the containers and process them.”

Dispatch Goods set out to build that infrastructure and now collects and processes between 10,000 and 15,000 food packages a week. It is already working with over 50 customers, like DoorDash, Imperfect Foods and 50 restaurants in the Bay Area, including Bombera, which has replaced 4,000 containers since it began using Dispatch Goods over the summer, Hoell said.

After replacing some 250,000 single-use plastics, overall, across its customers in 2021, the company today announces $3.7 million in seed funding. The round was led by Congruent Ventures and included Bread and Butter Ventures, Precursor Ventures, Incite Ventures, MCJ and Berkeley SkyDeck. The latest investment gives Dispatch Goods just under $4.7 million in total funding, Hoell told TechCrunch.

Hoell and Tekle are hands-on founders, even learning to drive trucks and forklifts, but their small team needed a boost, especially after seeing their monthly revenue grow from $700 last September to $20,000 in May.

They sought out capital with the intention to grow the team and outfit their current facilities, including a microhub in San Francisco, to be able to handle the growth that was happening outside of that area and its new facility in Baltimore.

“This use case didn’t exist before, so we are making the best of it until we can strategize on what a facility for reuse would be like,” Hoell said. “We are in the middle of building that right now.”

They plan to invest the new funding into additional geographical expansion, adding more restaurant partnerships and exploring new packaging opportunities. The company is also bringing on three new people by the end of the year to join its current staff of nine.

Though Dispatch Goods is mainly working with restaurant partners, it did kick off a pilot program last month targeted at consumers. Hoell said there was interest from that side, but the company will stick to selling into businesses so that the ultimate barrier to entry will be low.

Hoell didn’t go into specifics with growth metrics, but did say the company tracks how many items it is collecting and how many stops it is making. At launch, the company was collecting around four items per stop, and that has grown to an average of 12 items, while the number of stops grew to around nine (from three).

Meanwhile, Hoell and Tekle are excited to bring in Christina O’Conor, vice president at Congruent Ventures, as one of their new board members.

“The zero-waste movement is rapidly growing and we see circular packaging as an inevitable part of a sustainable future,” O’Conor said in a written statement. “Lindsey and Maia have demonstrated that they have the hustle, strategic insights, and passion to create new systems to support an infrastructure designed for reuse.”

They also have some star power on their advisory team in actor Adrian Grenier, who is co-founder of DuContra Ventures. Grenier said what Dispatch Goods is doing “has been on my mind for a long time.” In fact, he is so anti plastic containers that he avoids takeout as much as he can and even brings in his own reusable containers.

“We know how challenging it can be to reinvent the world,” he added. “Everyone is excited about the on-demand lifestyle that technology has given us, but to what expense? Dispatch Goods can save businesses the convenience and give them the opportunity to be able to afford this kind of shift in business model.”

The whole package: How plastics and sustainability startups achieve success