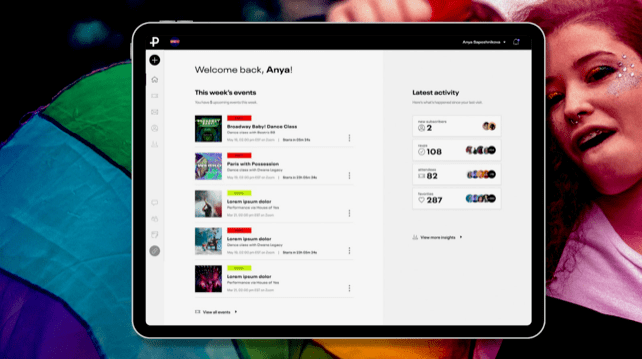 Launching today in beta, Playground is a social platform that seeks to help people discover and develop community while empowering creators to monetize their audience. Already, the website has a wide variety of users like the Museum of Modern Art, comedy host Alexis Gay, the Abolitionist Teaching Network, activist Nupol Kiazolu, and a Malaysian virtual dance club. For now, the beta is open to select creators in the cultural space (art, music, wellness, gaming, and more), and for community members, there’s a waitlist.

As a Taiwanese American daughter of immigrants who grew up in a culturally diverse Santa Fe neighborhood, founder Jia Ling Yang understands the value of bringing people together. But while working as a freelance creative director for brands like Facebook, Google Play and E! Entertainment, she decided that she wanted to help build community online in a new way. Of course, social media already creates communities, from neighborhood book exchange groups to One Direction stan Twitter. But life online can be isolating, too.

“Instead of scrolling and looking at each other’s lives, I’m saying, hey, let’s go put-put together. Let’s make Filipino food together, Let’s work out together,” said Yang.

In its current state, Playground helps users find both online and in-person events to attend with cultural institutions and creators. Eventually, Yang wants Playground to become an all-in-one, end-to-end platform for creators to run their business — they will be able to manage fan subscriptions, send newsletters, post their events, articles, and podcasts, view analytics, sell merch and more. Yang and her nine-person team are currently developing social tools to help community members connect with one another.

“We want to create forums for discussion between members,” Yang told TechCrunch. “The difference between having an audience where you’re just pushing content at them and having a community is that the members can actually interact with each other outside of the organizer.”

All-in-one platforms are valuable for creators, since it’s easier to manage one account than to juggle a Discord, Patreon, Eventbrite, Mailchimp and more. But there’s also inherent risk in entrusting the totality of your business with a startup. Still, Playground provides its creators with complete control over their list of subscribers and their contact info, so they’re not dependent on the Playground platform to reach their fans.

“It’s really frustrating when you don’t own your community,” Yang said. “Let’s say you built up an audience on Clubhouse or something, and that platform just goes away. Then your audience is just whoever messaged you in your Instagram DMs.”

There will be a free tier for creators on the platform, but to access monetization features, like paid ticketing and membership programs, they’ll have to pay $15 or $30 per month, depending on what level of customization they seek.

Yang is also considering how web3 plays into the future of Playground. Since its founding, her company has raised $2.3 million in seed funding from Animoca, Sogal, Gaingels and Anomaly. One investor, Animoca, is known for investing in blockchain-based projects, but among the cultural creators that Playground targets, there’s a visible anti-crypto sentiment. While some artists embrace the possibilities of NFTs for example, others worry about environmental costs and the proliferation of scams in an unregulated market. But Yang thinks that the crypto world has a communications problem.

“That world does not speak culture,” she told TechCrunch. “Cultural creators like the concept of being able to own your own art, monetize your community, decide the way your community is governed… These are all principles that creators are really into, and I feel like we’re just bridging the conversation a little bit.”

Yang is interested in a blockchain-based future for Playground, but for now, the platform is focused on onboarding creators and community members after its beta launch.