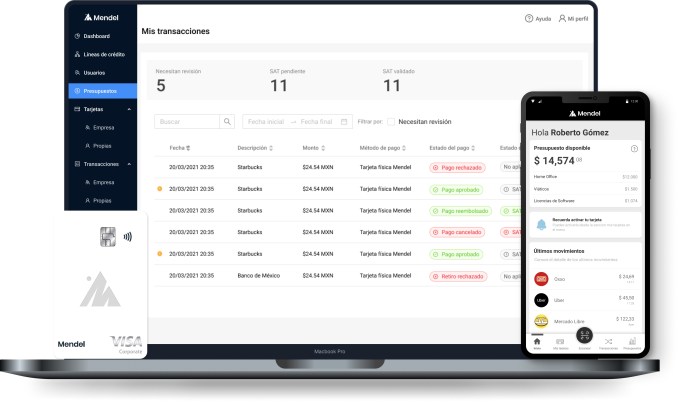 Mendel, a corporate spend management solution for enterprises in Latin America, announced today that it has secured $35 million in debt and equity.

Mendel’s mission is straightforward: to reinvent corporate spend management by automating most of the operations for an enterprise CFO that are currently done manually. Or put even more simply, it wants to be a one-stop shop for all B2B spend. Alan Karpovsky & Alejandro Zecler (who both previously founded and sold other startups) started the company late last year and Helena Polyblank (CPO) and Gonzalo Castiglione (CTO) later joined as co-founders.

“When you look at all the different areas of any enterprise company in LatAm, the CFO function is clearly the one that has had the least innovation,” said Karpovsky. “Unlike CMOs who have all sorts of media optimization platforms, content creation tools and social listening software, and CTOs who have countless frameworks, repositories, CI and code-enhancement collaboration tools, CFOs still rely mostly on spreadsheets and ERPs – and in some companies even fax machines.”

The corporate spend space is an increasingly crowded one. Ramp and Brex have both raised large rounds this year, and TripActions pivoted last year beyond travel to general expense management. Divvy got acquired by Bill.com. Mendel, however, likens its model to being more similar to that of Airbase, a U.S.-based corporate spend startup that in June closed a $60 million Series B led by Menlo Ventures and whose CEO is an investor.

“Our current solution is like ‘Ramp for Latin America for enterprises,’ ” Karpovsky told TechCrunch. “In the U.S., all these companies are targeting the startups/SMB sector. We are deeply focused on providing enterprise solutions for big companies where the CFO doesn’t wake up every morning thinking ‘How can I get more cash back’?”

Part of Mendel’s strategy is to attract customers with high payment volume and low credit risk, while at the same time charging a SaaS fee for the usage of their platform. The startup, which is focused on the Mexican market for now, has started strong — onboarding more than 150 clients (such as Mercado Libre, PetCo and Telcel) in the first months since it launched earlier this year. Mendel says its payment volume (GTV) has increased by 100x in the last three months. Currently, its  payment volume is growing 2x week over week, according to Karpovsky.

The B2B payment market in Mexico is a massive opportunity, the company believes, especially considering how few payments are made by cards. In fact, Karpovsky said that traditional banks and American Express have not been growing market share in the country “for years.”

Presently, Mendel has 70 employees and it expects to end 2022 with 200. It also plans to use its new capital to “invest heavily” in product development, including expansion into broader B2B payments, as well as toward marketing and awareness. Money will also go toward developing new business verticals and partnerships.

Its investors are naturally bullish on the company’s potential.

ALLVP’s Federico Antoni said his firm has been looking at the corporate spend and financial services space for years, viewing it as a “huge opportunity” in LatAm.

When it came across Mendel, he was impressed by the team’s vision to “build the next Nubank for corporates.”

“The mission and vision for Mendel resonated with us immediately,” he told TechCrunch.

“In Latin America, larger enterprises are underserved by incumbents, and Mendel is democratizing access to best-in-class software and payments,” he wrote via email. “As we have seen with the success of other corporate card and expense management startups globally, we believe that Mendel has the team, technology, and tenacity to become the leader in Latin America.”

Better Tomorrow Ventures’ Sheel Mohnot said his firm was drawn to invest in Mendel because its “product really needs to exist” in LatAm where “no one else is going after” the problem.

“We’ve seen a lot of success with this model in the states and there is more of a need in LatAm — companies don’t just give cards to everyone, the spend controls are important,” he said. “These guys have previously built a successful business in a similar business and had already signed on Mercado Libre as a customer before we led the seed round.”

Why global investors are flocking to back Latin American startups